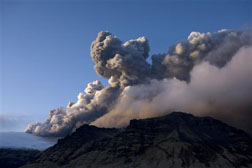 We asked CAA members how their travel plans might have changed from the delays caused by the dissemination of Icelandic volcanic ash over Europe in late April 2010.  Here are three responses:

From Jim Barkas (Formerly of the Chase East European team in the International Department and the Japanese Trading Company team in Commodities):

Overland Through the Balkans

"After closing a deal for an old Chase customer in Sofia on April 16th, I celebrated through Friday night only to be awakened at 2 am on Saturday morning by a call from the Bulgarian hotel receptionist informing me that the Munich airport, the transit link, was closed, thereby cancelling my morning flight into former Yugoslavia. My wife called from her office in New York shortly thereafter and we began a two-hour nocturnal dialogue with the airlines to cancel and redeem my travel reservations for Serbia, Croatia and Slovenia.

"The receptionist advised me to take the first bus to Belgrade, scheduled for 9 am that morning. To be sure I'd a seat, I arrived at the bus station early at 7:29 am,  just in time to get the last seat on the departing 7:30 am bus, which turned out to be the only bus of the day: So much for published Balkan bus schedules. The mini-bus carried about 20 passengers across the border into Eastern Serbia, where the early plum blossoms highlighted the misty early morning fields and hills.

1979 World Bank/IMF conference. A former military bordello of sorts, the Bristol had been renovated to accommodate the Chase team quartered along with 40 Libyan students, and protected by Colonel Knezalic and his beefy Serbian security team.  After its moment of glory, the Hotel Bristol had returned to its earlier role accommodating the Serbian officer corp.  Not a place for me to stay these days. Such was the neighborhood in which I found myself.

"Time to make some contacts and figure out who to see and how to travel overland along the old Balkan routes so as to eventually reach my ultimate destination, Budapest.  On an earlier visit to Belgrade, I was met at the airport by Borka Vucic, EVP at Chase’s best customer in the region, Beogradska Banka.  This time Borka was gone, mysteriously killed in an auto accident some months prior. The rumors circulating Belgrade cafes suggested that perhaps Borka was the lady who knew too much about where she had quietly parked the millions, if not billions, looted by her former boss, Slobodan Milosevic.

"Fortunately, my friend, Petar K, a legacy of another Chase customer, Mitsubishi, popped over to rescue me, arranged some key meetings and then orchestrated rides to Novi Sad, and then further with another partner to Zagreb.  In Novi Sad, I tried to reconnect with Savo Pejovic, another old Chase customer from Vojvojdjanska Banka, but missed him.  Got to Zagreb in time to catch the night train to Ljubljana. En route, other passengers related their horror stories of cancelled flights and days of travel on the slow trains up from Athens.

"The train arrived at midnight in Ljubljana, a city that does sleep at night, where the venerable Hotel Slon continues its fine service as a renovated Best Western hotel.  A familiar face greeted me at the reception desk. Many a time I have stayed there during my fifty plus visits to the region.  During this Slovenian stopover, I managed to see yet two more former Chase customers from the former Privredna Banka Sarajevo – Sabrija Serifovic and Zvonko Toula, who respectively came up from Sarajevo and Zagreb.

"Finally the last overland leg, on the Venetian Express, departing in the early morning on its route to Budapest.  Crossing two borders, entertaining four separate passport checks before dawn, I reached Budapest at noon where I dined with none other than Chase Alumni Charles JLT Kovacs, the epitome of equilibrium and equipoise. Soon the airports opened and travel returned to its relatively tedious norm.  In retrospect, going overland by bus, car and train was much more enlivening than today's aggravating airport routines."

"Some people struggled to find a way out.  We were finishing a 16-day cruise from Lisbon to Venice when the airports started closing down. As we planned on spending several days in Venice before heading home, we naively ignored the problem.  We disembarked in Venice on April 17th with a reservation to depart on the 20th.  In actuality, we left Venice on the 25th. Not bad you say? Well, we were celebrating my 70th birthday, so we were booked into a rather grand hotel.  We paid the price for our unplanned luxury.  The worst part was dealing with the uncertainty.  We couldn't get a plane or train out so we had no idea when we would get home. It was very frustrating when Lufthansa sent me an email saying that our Frankfurt to Philadelphia flight would operate on the 20th as scheduled.  Of course, they ignored the fact that they had to get us to Frankfurt first on a cancelled flight.
"The extended stay was even more expensive for the bank.  The day or so after our originally planned departure, our credit card data was stolen at some restaurant.  In a matter of a few days, several thousand dollars of fraudulent charges were wrung up.  It is interesting that a number of our acquaintances have told us, after the fact, that the same problem occurred to them in Venice. It is a good lesson: Use ATMs and cash."

"My wife, Manjula, and I were on board a Delta flight from Amsterdam's Schiphol Airport to Detroit.  After 10 minutess on board, the captain announced that the airport has been shut due to a volcanic eruption in Iceland. When we got off the plane, there was a huge commotion. The airline staff gave us phone coupons to call our children and gave us a lunch coupon and were doing the best they could, but we were not given any accommodations. We checked on our own at Yotel, a hotel inside the terminal. But, as we expected, it was full. The lady at the counter was nice and gave me a WIFI access code so I could check some hotels on my laptop. We logged on to Orbitz.com and was lucky to find a hotel about 20 minutes from the airport by bus. The hotel was in Haarlem, a small Dutch city. The place was great, the "Hotel Haarlem Zuid" was great. We were then on wait mode to get our airline to rebook our flights, checking e-mails every few hours. We indulged in nice restaurants in Haarlem and walking to shopping and places of interest that town for dinners and walk to shopping, places of interest -- Teylers Museum, St. Bavo Church.  Delta booked us exactly seven days after our flight cancelled on April 22nd and routed us through Minneapolis to JFK.   Since we are retired, our story is a pleasant one, where we made the best out of it!"