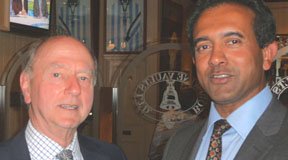 Back to the Bow Wine Vaults

Thirty-two alumni and guests – including CAA Paris Chapter Coordinator Jean-Gabriel Romain and his wife – gathered for the London chapter's spring cocktail on May 27, 2010 at their usual haunt, the Bow Wine Vaults.

The guests lifted a glass to the memory of members who had passed away since the last CAA event:  Bill Else and Val Brady.