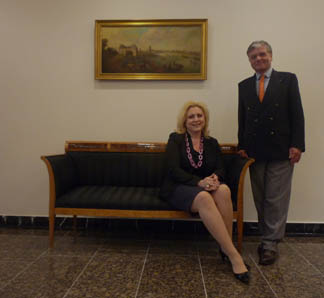 For CAA Frankfurt's May 26, 2010 gathering and his farewell after more than 10 years as chapter coordinator for CAA's German section, Peter Gatti picked Frankfurt's Neue Volkswirt (the New Economist) – a formidable wine bar with outdoor seating in a cozy atmosphere. The evening was more formidable than cozy, though, as it was raining cats and dogs.

Nonetheless, 25 friends came to wish Peter well and welcome his successor, Dr. Rolf Stokburger.  Rolf thanked Peter for his continued and reliable engagement  over the years.

Peter was strongly supported by Christine Schmidhuber, his team assistant, who in a marvellous way took care of all invitations and gatherings over a full decade. [Christine now runs CS Fine Communication and has launched a new online magazine,  NO 1, OFFICE AVENUE for all women at work in the German speaking countries: www.no1-officeavenue.com).

Rolf intends to keep the activity level high and will try to gain new members from JP Morgan.

The next meeting is planned for the second half of August and will be followed by our traditional thanksgiving dinner at the end of November.