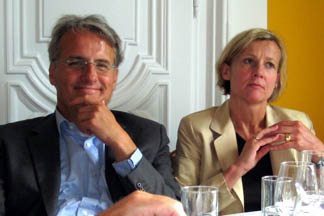 On June 23, 2010 we held our Business Luncheon at Vienna's St. Johann’s Club. Our guest speaker was Christine Dornaus, who was appointed to the Board of Directors of Vienna Insurance Group approximately two years ago.  She gave us an excellent overview of the insurance market in Central and Eastern Europe.

The Vienna Insurance Group -– originally the "Wiener Staedtische" –  expanded rapidly in the early 1990s into Central and Eastern Europe and is now the biggest insurance group in the Region. It has survived the last two years relatively unharmed due to its conservative policies.

Christine had originally moved to Brazil with her husband in 1983 and joined the Chase Brazil Credit Department in São Paulo in 1984. We would like to thank Christine for her brilliant presentation.