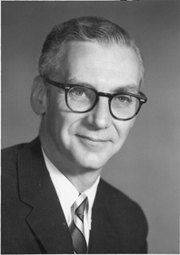 A resident of Rowayton, CT and New York City, he graduated from Princeton in 1946. His early career was in the Metropolitan Department, where he advanced to senior vice president, working with Don Boudreau. In 1975, he was a group head in Corporate Banking under Herb Jacobi, responsible for the Shipping, Petroleum, Aerospace and Finance Company Divisions. He subsequently became a credit policy executive under Jack Hooper. He retired in the mid-1980s.

He is survived by his wife of 57 years, Anne Reuther, his three sons, Duncan and wife Beth of Chicago, Gordon of Norwalk, Andrew and wife, Christine, of Fairfield and six grandchildren. Contributions may be sent to Norwalk Hospital Foundation, 34 Maple St., Norwalk, CT 06856.


Colleagues and friends are invited to share remembrances.  Please send them to news@chasealum.org.

From Peter Larr: I had the extraordinary pleasure of working with Hobie for several years. I have met few in my career who combined such wisdom and practicality with a wonderful, soft spoken humor. He was a gentleman and great mentor. There are never enough people like Hobie in this world.

From Paul Walker: I remember Hobie as a very dedicated banker and true gentleman. He was an effective developer of business and demonstrated sound credit judgment. While demanding thorough understanding of every proposal brought for his approval, he was always decisive and logical in his decision making. Those who sought his approval always knew his response would be fair and objective. Hobie was truly a respected and admired banker.

From Paul Tongue: Hobie was, without any hesitation in my mind, the finest boss I had the privilege to serve at the Bank. He was a caring, thoughtful mentor who was possessed of that quality which is so scarce today, wisdom. He could always be relied upon to provide sound advice, whether on business or personal matters.  One can’t help but wonder how much better the banking industry would be today if there had been more like him running the business. Requiescat in pace.

From Don Whitham: I met Hobe during my first week at the Bank in October 1961, when I was assigned to Grand Central office for my pre SDP training.  Hobe had recently succeeded an equally young Bill Butcher as manager.  He held weekly "seminars" for the branch credit department personnel (headed by Frank Reilly) in which I was included.  I was green as green could be at the time, of course, but I recall being in awe of Hobe's in-depth knowledge of the characteristics of various industries and our corporate customers.  Later when I was assigned upstate, I reported directly to Hobe for a while before he was succeeded by Tom Hayne.  Hobe was also Bob Weaver's boss when I joined the Land Transportation Division.  I had occasion to meet Hobe's exceptionally charming wife, Anne, during both those assignments.  What a class couple!
Hobe belonged to that bygone era (approximately 1930-1980) that produced so many great captains of finance who performed their duties without greed, but with exceptional judgment and intelligence, and with unquestioned integrity.  I weep for him and for that seemingly long forgotten era.

From Don Boudreau: In the early to mid 1970s, Hobie was my boss, mentor and friend. He was a great guy to work for, providing guidance and direction while allowing plenty of room for his people to operate. He was always there and supportive. Hobie defined integrity in how he dealt with the people around him. To say he was smart and insightful is an understatement. He was thoughtful, funny and unpretentious, and always a gentleman! I have immense respect for Hobie. The Bank was poorer when he retired.