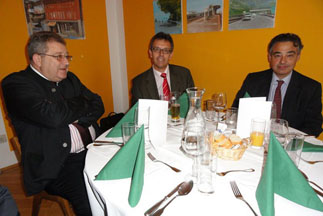 On October 6, 2010, in the absence of CAA Vienna Chapter Coordinator Wolfgang Fenkart-Fröschl, Gustav Dressler welcomed Andreas Treichl, CEO Erste Group, as guest of honor at the CAA luncheon in Vienna.  Since Erste is strongly engaged in Central Europe, Treichl concentrated in his speech on CEE and the recent financial turmoil.

Erste Group** is focused on the eastern part of the European Union (Austria, Czech Republic, Romania, Slovakia, Hungary, Croatia), where it is the region's leading retail bank, bond originator and fund management company, as well as one of the leading corporate banks.

Among Treichl's most telling observations: