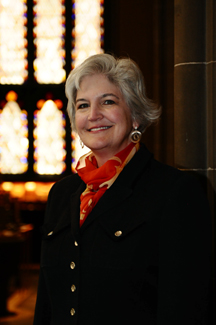 God Is in the Numbers

After a fulfilling 21-year career at JPMorgan Chase and a stint as CFO and managing director for Citi Smith Barney, you might say that Stacy Brandom is now – like Hebrew National, but from the other side of the aisle – answering to a “higher authority”.

Since October 1, 2009, she has been CFO and Executive VP of Trinity Wall Street, one of the leading Episcopal parishes in the nation and, as she puts it, a church with “tentacles” in New York’s history and its real estate market.

In what Brandom calls a “soup to nuts position,” she oversees Trinity's treasury and finance departments, its investment portfolio, plus human resources (for 180 employees, some part-time), technology, the historic churches and other facilities (landmarked and non), the Trinity Cemetery and the Trinity Conference Center.

As a member of Trinity Wall Street’s senior executive team, she works with Clergy and lay staff and Trinity’s Vestry (in the Anglican faith, akin to a Board) to guide the strategies and decision-making for the church in support of its mission. Trinity’s commitment to “a world of good” includes extensive educational programming, a significant local and global grants program as well as a world-class music program, its centerpiece being the Trinity Choir. The programs at Trinity are supported by its commercial real estate holdings, which include six million square feet centered in the Hudson Square area in lower Manhattan.

“There is always the question of striking the right balance between protecting Trinity’s patrimony for future generations and all the great things we want to do today,” said Brandom.  “I have a profound sense of responsibility about helping to make these decisions which gives me the sense of contributing to the institution.”

She says her husband’s dubbed her “Church Lady”, given her long and important connection to her church growing up and her own Larchmont Avenue Church, a Presbyterian church in Larchmont, NY.  She currently teaches Sunday School there and heads its finance committee (lucky church!).

But she has long had her feet planted in business. A native Kansan, she holds a BBA in accounting and information systems from the University of North Texas and an MBA in finance and marketing from Northwestern’s J. L. Kellogg Graduate School of Management.

She and her husband, David, a jazz saxophonist and teacher, left the Midwest after Stacy completed graduate school, thinking it would “be great fun to experience the big city for a few years.”  Twenty-five years later, they are still here. “We made our lives and raised our children here.  We’ve grown to call New York our home. Our schedule may seem a bit confounding but it works for us.  While I’m in the city during the work week, Dave could be home managing the household. Then, evenings and weekends, Dave goes to work and I take the parenting reins.” Their three children, all boys, are now 18 (just graduated from high school), 23 (graduated college) and 26 (married last summer).

Between undergrad and graduate school, Stacy worked for Arthur Andersen in its consulting division. Then after Kellogg she started at Chemical Bank in 1984. “Many mergers later”, she left JPMorgan Chase in 2005, having served as CFO and Senior VP for the Corporate Sector, CFO and Senior VP for the Commercial Banking Group, and Managing Director in the Investment Bank.

She said it was a difficult decision to leave Chase for Citigroup Smith Barney. “Many of my best friends are alums or still work at JPMorgan Chase,” Brandom noted. “Citi’s business platform gave me a great opportunity to learn new things, especially the asset management and private client business,” she said. “But, I got to the point where I was hungry to do something different. I decided to take a break to rethink priorities and what I wanted to do with my life. Although I had a great deal of intellectual fulfillment during my career at Chase and Citi, and had the opportunity to work with super-smart people every day with a sense of camaraderie, which I loved, I still felt that I was at a place in my life where I wanted to find more creativity and meaning in my day-to-day work.”

She left Citigroup to take a sabbatical and think through her options. After taking a break, she formed Brandom Advisors, LLC, which provided financial advice to individuals, families and small businesses, she was also busy exploring opportunities, including at not-for-profits.

“I’d been very much focused on improving business results, quarterly reporting, the things that drive a business forward,” she said. “Those things are great, and it was a fun and thrilling career path given the changes in the financial services industry. I was right in the middle of it.”

When she was recruited for the job at Trinity, though, she knew it was what she was seeking. “I knew that I wanted to make a contribution to this organization,” she said.

Trinity, which boasts Alexander Hamilton as a former parishioner and George Templeton Strong as a former comptroller, is now the most diverse Episcopal parish in New York. Worshipers from all five boroughs attend services each Sunday, including a Sunday evening compline service at St. Paul’s Chapel, home to the ministry to first responders and recovery workers after the September 11th terrorist attacks on the World Trade Center. Over 120 groups use Trinity’s parish hall and spaces, which includes the newly opened Charlotte’s Place on Greenwich Street. Its concert series are renowned.

With the growth of residential population in lower Manhattan, enrollment at Trinity’s pre-school is back up, and over 300 kids participate in its youth choruses.

Brandom is currently involved in planning and “budgeting” for Trinity’s involvement in the upcoming commemorations of the 10th anniversary of 9/11, an event that profoundly affected the parish, located in the shadow of the World Trade Center.

Brandom gave a preview of the 10th anniversary week. “Trinity has planned a full calendar of events, including many stirring musical events in St. Paul’s Chapel and Trinity Church, as well as daily Prayers for Peace, and a symposium hosted by Krista Tippett offering perspectives on 9/11 and how it changed all of us. James Cooper, Trinity’s Rector, is asking those that participate to ‘remember to love. We want to remember and honor those who perished by generating a post-anniversary community committed to reconciliation and peace.’”  Trinity Church itself is at the foot of Wall Street on Broadway.

The most dramatic change since 9/11 has to do with the parish’s St. Paul’s Chapel, Manhattan’s oldest public building in continuous use. Pre-9/11, it was known as a Revolutionary War building where George Washington worshipped after his inauguration at Federal Hall and many times thereafter. Perhaps 250 tourists would visit per week.

Then came 9/11. Recovery workers received round-the-clock care in the chapel, and it gathered a new historic significance, along with ash and grime. Brandom said that it is now visited weekly by 30,000 to 50,000 people. Trinity has had to make a major investment in the facility: guards, updated electrical, installation of an ADA-compliant bathroom and translation of the English language brochure into Spanish, German, French and Japanese. An iPhone app is being developed.

Brandom’s challenge is expressed in the title of a book by John Wimberly to which she contributed the foreword: The Business of the Church: the Uncomfortable Truth that Faithful Ministry Requires Effective Management.

“It’s a good book for clergy to read or for those who participate on religious institution boards,” Brandom explained.   “What is the ‘uncomfortable truth’?  To actually make an impact on the world, you need to manage your human resources, physical resources and financial resources.

“We need to face it. At any religious institution, you still have to use your resources to support your physical plant and your staff and congregation, but you also want to be able to do good works in the world – and help people who need it. It’s a healthy tension.”

Much of Trinity’s budget helps people worldwide, but, said Brandom, “Trinity also provides significant resources to make the church welcoming both as a place of worship and historically significant institution.

“We manage our assets as a business would – taking the right risks, setting the right market rents – while at the same time being serious about building our community.  In a business, the framework for making a decision is pretty clear: you do what will protect you from risks and help you make the most money,” she explained. “In a not-for-profit, sometimes you need to be clear what your objectives are, what the impetus is.”

Were there other adjustments to not-for-profit life? “I’m not going to say I’m never frustrated by the pace of decision making, but I feel as though I’m very grounded in the situation. Trinity has been here for 300 years, and wants to be here another 300 years. We have the luxury of being very deliberate in our decision making,” she added, “and different is not so bad.”