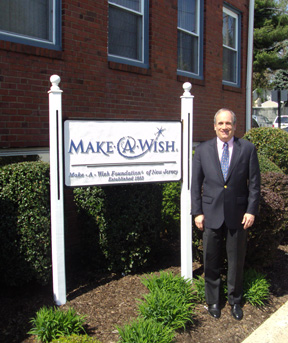 It’s not just a job, but a mission.

Jack Caulfield, a 22-year veteran of Chase, is in his third year as chief financial officer of the Make-A-Wish Foundation® of New Jersey, which yearly grants wishes to up to 450 children facing life-threatening illnesses.

Having earned his a degree in accounting at Fordham, Caulfield spent seven years in public accounting and earned his CPA while at Arthur Young before joining Chase in 1982.  He spent the bulk of his career in the controller’s office, with stints in Institutional and Global Banking.  He was director of financial accounting and reporting in the early-to-mid 1990s.  Among his colleagues in controller’s were Erich Augustin, Tom Brennan, Les Stevens, Mike Esposito, Dick Fama and Dave Morris. “When the Chemical merger was finalized, I left and went into the retail side of the Bank, where I worked for John Hehir and Peter Schleif.  Then I joined the Small Business Financial Service group under Joe Scharfenberger,” he recalled.

“I look back at the years I spent at Chase with fond memories and utmost respect for the people I worked with,” the 58-year-old Caulfield said. “When I started with the finance group in the 1980s, it was a very tight knit group.  I knew most of the finance people in the firm within the first few years I was there and saw them as true professionals.  I learned a lot from those people: technical skills, discipline in planning, and making sure you were doing things with the highest level of integrity and honesty.

“While I still use the skills developed at Chase, my current work environment is entirely different.  I enjoy it no end, working with people who are committed and passionate.  They tend to be much younger – people who are a few years out of college – but there are a few that have been here for 10 to 15 years.  There’s a lot of energy.  And the CEO: I don’t have to have a cup of coffee in the morning.  He comes in and he’s a whirlwind and gets everybody motivated.”

In 2004, at the time of the merger with BankOne, Caulfield was offered a package and retired as a senior vice president. “Retirement coincided with my taking on the chairmanship of the board at St. Peter’s Prep in Jersey City, my alma mater as well as the school that my dad and two sons attended,” Caulfield said. “That kept me busy for six years, with my term expiring in June 2010.”

Following his years at Chase, he hooked up with an old friend who owned a small N.J. public relations/marketing/advertising firm and was looking for someone to come in and run the office while he could bring in new business. Caulfield worked for the firm four days a week, giving him time not only for his St. Peter’s Prep duties but also for his wife, Mary Beth and two sons, Edmund and Christopher.

One of the people at the firm was the then wife of the CEO of Make-A-Wish Foundation of New Jersey.  The wife told him the CEO was “looking for a finance guy.”

“I’d actually known Tom Weatherall, the CEO, growing up in Jersey City,” Caulfield said. “I felt I’d accomplished all that I could at the marketing firm, so I met with Tom in June 2008 and started the new job in mid-July.”

“As Tom often says ‘We want to act like a business but with the heart of a charity’,” Caulfield said.  The N.J. group ranks in the top five of the 68 Make-A-Wish Foundation chapters in the United States and raises $5.5-6 million annually.

Working at a relatively small not-for-profit, Caulfield finds himself completing day-to-day tasks that he hadn’t done since very early on in his career.

On the other hand, he has taken on a lot of responsibility for long-range strategic planning and the building and financing of a new “Wish House”, expected to open this fall in Monroe Township, NJ.  Both activities have him working with other business professionals and board members from the finance world and entrepreneurs.

The new headquarters will lengthen Caulfield’s commute, but it will provide important space for families, volunteers and employees.

“The bulk of the Wish House is intended for the kids,” he said.  “The house will permit the 'Wish' kids to really use their imaginations and fully understand the possibilities of a wish.”

Caulfield also has some responsibilities for HR.  “We currently employ 22 people, including two part-timers - One of whom is Marie Rega a former Chase HR professional.  We have more than 300 volunteers – most of whom have an affiliation with the organization through relationships with family or friends of people who had a ‘Wish’ child or other Foundation volunteers” he explained, noting that with the move to Monroe County, NJ, there may be an additional pool of volunteers from the large senior community there.

“Volunteers fill a number of crucial roles,” Caulfield said. “We use very few volunteers for day-to-day activities, but we rely on them heavily for outreach to our 'Wish' children and their families.”

The Make-A-Wish Foundation’s national office, based in Phoenix, has specific requirements to certify the eligibility of “Wish” children, aged two and one-half to 18 and facing a life-threatening – though not necessarily terminal – illness.

A volunteer is then assigned as the interface with the family, “visiting the child to ask the magic question: ‘What would be your fondest wish?’” Caulfield explained. “We do a pretty rigorous training program with the volunteers – an intensive initial course and then refreshers.  We want to insure that they are prepared to deal with this crucial interaction.”

“The greatest number of requested wishes involves travel, especially to Disneyworld. Some of the trips are exotic, such as for the children who wanted to go to World Cup matches in South Africa.  Some of the basic non-travel wishes are having a bedroom made over, going on a spree at a mall, getting a computer or having a playground built in the backyard.”  The average cost per wish fulfilled is $7,500, with several vendors – including Disney – providing special rates to assist the Foundation in funding as many wishes as are in the pipeline.

Many wishes are “experiential” – meeting some sports or other celebrity.  Caulfield said that the New York Jets and Giants are “exceptional” to the Foundation, and the chapter has formed a real bond with TV’s “Cake Boss”, Buddy Valastro of Hoboken, NJ.

Many families defer the wish until the child’s treatments are finished, so they are in better health to enjoy it, while others travel mid-treatment to take them out of the day-to-day grind of medical care.

“Illness creates a tremendous strain on parents and siblings, with many siblings seeing how much time is being given to a brother or sister and asking, ‘When will I get this kind of attention?’ That’s why a family trip can be so valuable,” Caulfield said.

“I don’t get to see the kids as much, since I’m on the administrative side, but when we do recognition events and fund-raising, such as our big event on June 17 at the Hyatt in Jersey City, it’s really rewarding to interact with the 'wish' children and their families,” Caulfield said.

“For events, be they a walk or a fund-raiser at a bar or a reception for major contributors, it’s all hands on deck.  We all pitch in.  I take off my finance hat and work on everything from the set up to the clean up.  And it’s not just the people who work in our office, but their husbands, wives, kids.  You see, for all of us our mission – granting the wishes of children with life-threatening illnesses – is everything."