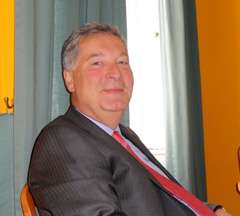 CAA Vienna heard from Helmut Breit, Raiffeisen Bank International, at its spring luncheon on May 4 2011.

Helmut gave an excellent overview of the Raiffeisen Group during the past two to three years and the challenges lying ahead with Basel III and Raiffeisen's future plans in Eastern Europe. Raiffeisen has weathered the crisis well and will continue to focus on Eastern Europe where debt/GDP levels are still relatively low and where GDP growth rates will be double of Western Europe. Raiffeisen´s retail network will be expanded and the customer deposit base expanded. The new corporate structure will make it easier to access capital markets.