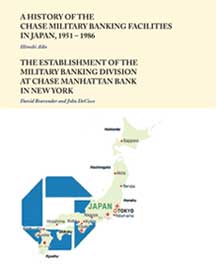 Although most of the manuscript is focused on Japan, an appendix describes Chase's evacuation from Saigon at the end of the Vietnam War.*

Readers are welcome to share comments and their own reminiscences.  Please send them to news@chasealum.org.

"In 1966, widespread protests were directed against the bank following David Rockefeller's decision to open a Chase branch in Saigon. A strong supporter of U.S. involvement in the Vietnam War, Rockefeller traveled to the capital of South Vietnam to open the building personally; a sandstone fortress, it was designed to withstand mortar attacks and mine explosions." (Source: http://www.fundinguniverse.com/company-histories/JP-Morgan-Chase-amp;-Co-Company-History.html)