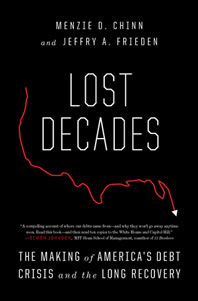 Read It and Weep

"Lost Decades: The Making of America's
Debt Crisis and the Long Recovery"

This superbly clear and readable evocation of the decisions and actions that have led to America's becoming a debtor nation on a horrifically grand scale comes from two political economists, Jeffry A. Frieden of Harvard and Menzie D. Chinn of the University of Wisconsin/Madison.

A large portion of the book will be familiar to anyone who has lived through and followed the actions of Congress, the Fed, banks and the President during the first decade of the 21st century; it is a terrific summary of those events for, say, college students who might not have been as aware of the timeline of events when they were in high school but are growing up to inherit the debt that was incurred.

The book puts those familiar events, however, in the context of domestic and world history, international economic and financial movements, monetary policy and economic theory in a manner that will enlighten even the closest follower of The Wall Street Journal or The New York Times.  The authors devote substantial space as well to the role of China as lender and its manipulation of currency to aid its exports.

Admirers of the Bush Administration or the Tea Party might take exception to the authors' conclusion – which will probably seem quite reasonable to those who think the authors are simply calling a spade a spade.  They write:

"There was nothing inevitable about the loss of the last decade.  Its loss was due to decisions made by governments, decisions that were too little motivated by concern for the public interest and too much motivated by political expediency.  Certainly citizens could have been more vigilant, bankers more conscientious and regulators more watchful.  But the root of all the evil that befell the country was irresponsible government policies, policies that encouraged a foreign borrowing binge and consumption boom, policies that allowed financial institutions to take inordinate risks with an implicit government guarantee, policies that gambled with taxpayer money."

Chinn and Frieden warn that the United States faces the prospect of another "lost decade" in which it will have to repair the "economic wreckage" of the last, a painful and difficult process that will be complicated by political obstacles and those who refuse to face "the new reality".

"Americans policymakers deluded themselves into thinking that massive current account deficits and massive borrowing to finance them would not matter in today's era of globalization. They believed that the United States was immune to the troubles that have afflicted major foreign borrowers for centuries," write Chinn and Frieden.

Clearly the United States was not and is not immune, and its politicians are going to have to make difficult decisions and explain why they are necessary to an electorate that may not understand economic theory but knows that it's rough out there.

Chinn and Frieden suggest some possible steps on the long road to recovery, including: the revision of the tax code to stop rewarding debt, introduction of a VAT, repeal of the Bush-era tax cuts, actually implementing the Dodd-Frank reforms, raising the retirement age, "restrained growth" of Medicare and Medicaid spending, a Fed that focuses "more on affecting asset prices – in particular on pricking bubbles – than it has in the past", and recognition that global finance requires global rules, such as are being developed by the Basel Committee.

Most of all they argue that reform must be pursued in the public interest, not for private gain.  "Advanced industrialized countries with a debt-to-GDP ratio as large as the United States now has usually stagnate for years after a financial crisis," the authors state. "Hardship and stagnation will compound the widespread anger over the crisis and its effects, and this anger will be intensified by resentment over the increasing gap between rich and poor in the United States."

This book will give readers – and leaders – in the financial sector much to think about.  Many Americans will no doubt read it and weep.

– Andrea Axelrod
CAA members are invited to send comments about the book and/or the authors' recent op-ed in The New York Times.

Click here to order from Amazon (release date in September 2011).