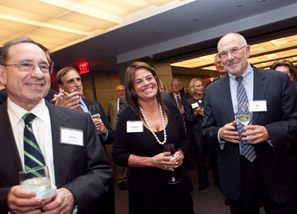 A driving rain kept some Chase alumi from their appointed rounds (mostly beer and wine), but about 240 braved the elements to attend the CAA Fall reception on October 27, 2011 at JPMorgan Chase, 270 Park Avenue.

Door prizes were won by Nancy Quaife, Peter Roggemann and Stephen J. Jurcsek (though his father, Stephen Jurcsek, thought for a while that he was the winner).  Dennis Glavey won the grand prize, a framed photograph taken by CAA member (and former Chase attorney) Fred Cohen.

For those who might have been concerned:  Our colleague who fainted was eventually attended by EMTs who allowed him to go home. He seems to be fine.