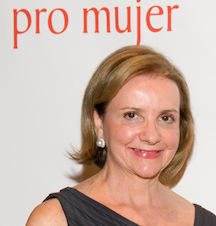 Breaking the Cycle of Poverty in Latin America

Rosario Pérez was an ABD – all but dissertation – in European History at Yale when she entered a mini-MBA program for scholars, organized by Citi’s Walter Wriston, among others. It was a tough time to get a job in academia, and bankers thought it would be smart to bring some of that brain power to Wall Street.

Indeed, she decided to join Citi after the program, but by 1984 had joined Chase, where she remained until the end of 2005. She was always in the Private Bank, starting as a vice president. When she left, the Mexican-born Pérez was in charge of the Latin American bank. “We were one of the largest players in Latin America – helped by the David Rockefeller legacy, a little from Chemical – where the best part was from Manufacturers Hanover – and JPMorgan,” she explained, “but the Chase franchise was the strongest, in all cases.”

She’s gone from focusing on the highest-end clients in Latin America to helping some of the neediest, through the not-for-profit Pro Mujer, which she now heads. Pro Mujer – “For Woman” – brings a holistic approach to helping poor women in Bolivia, Nicaragua, Peru, Mexico and Argentina. Pro Mujer fights poverty by providing an integrated package of financial and human development services that women require to build and improve their small businesses.  It is the only NGO focusing on Latin America that was honored at the 2009 Clinton Global Initiative for improving the lives of women and girls. 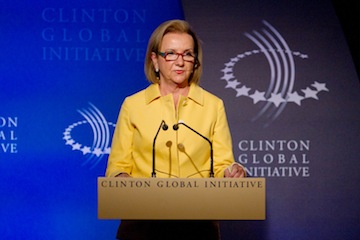 “When I left Chase, I started my own consulting firm. I was really thinking what do I do next. I got a lot of calls from competitors, but an executive coach I had said, ‘Take a breather – don’t even take phone calls,’” Pérez recalled. “I’d been a workaholic.”

She had always been into philanthropic work while at Chase, serving on the board of Helen Keller International. Post-Chase, she set up a foundation in downtown Mexico City along with a Mexican friend who is a philanthropist and another woman who was an expert on using arts education as a way of improving social integration and overall education for the impoverished.

Then she got a phone call she did answer, from a person on the nominating committee of Pro Mujer. “I hadn’t really heard about it,” Pérez recalled. “What really attracted me was the focus on Latin America and on poor women.  I have to give back to Latin America since most of my banking work was there. … and I’m a women’s advocate, particularly in Latin America, where in general women don’t have opportunities, and they suffer a triple whammy when they’re poor and indigenous.

“And the clincher for me – really, really – was that Pro Mujer was really started as a training and empowerment organization that added microfinance later,” she continued. “Giving tools, a loan, life skills, empowerment, preventive health, education – that whole combination is the magic of Pro Mujer. I saw it was very education and training based and treated women not as beneficiaries but as agents of their own lives who needed access to the tools that could change those lives.”

So Pérez served on the Pro Mujer board for two and a half years as it transitioned from an organization run by its two founders. She was on the search committee for a new CEO, working with a search firm.

Then one of the founders asked if she would consider becoming CEO.

“Then the chair of the search committee asked the same thing. I thought, ‘I can do something really good and feel good about it.’ She was offered the job in June 2008.

“The move from business to the not-for-profit sector is not automatic,” Pérez observed. “You can bring your business skills, but there are other cultural things that in the for-profit world are talked about but not emphasized. In not-for-profits, you really have to build consensus and have to go a little slower to engage different constituencies.”

Her biggest organizational challenge was bringing standard operating practices to the five countries in which Pro Mujer had offices. “In many ways, there were five separate countries with common model but no standard practices. At Chase, when you had mergers, systems were pretty much similar. The five Pro Mujers were dissimilar,” she said. “We have now been successful bringing them into one team.”  The organization has grown from 1,300 to 1,500 employees under her watch. In 2010, Pro Mujer disbursed $138 million in loans. The organization now serves about 240,000 clients and, in addition, more than 1.6 million children and extended family members.

“I wish more of my time was spent in fund-raising, but I needed to get immersed in the business. Microfinance is a different business than finance. You need to touch the tires. So for my first three and a half years I have spent 85 to 90 percent of my time on operations. Now I have someone running country operations,” 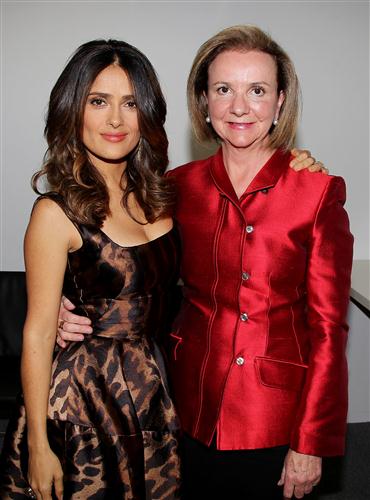 Pro Mujer was co-founded in 1990 by Lynn R. Patterson, a Long Island school teacher, when she and her husband moved to Bolivia. She focused on very small loans and creating communal banks in which women guarantee each other’s loans.  A person in the U.S. Agency for International Development (AID) in Bolivia who had helped get Pro Mujer off the ground told Patterson that Nicaragua needed something similar. Patterson went there with a laptop and a young Peace Corps volunteer and opened an office with U.S. AID help.

Then Peru came up, Mexico and finally, in 2005, Argentina.

“In Latin America, nobody is doing the combination that we do,” Pérez said. When Patterson and Carmen Velasco co-founded Pro Mujer, they were asked to drop other services they wanted Pro Mujer to provide to women and their families, but they resisted. "Poverty is a complex issue – not one magic bullet that will solve it,"

“If either the woman or her children were sick – health can have a terrible impact. Training is also very important. If you don’t know how to deal with a loan and know what to focus on, the loan may not be effective.

“Our clients are very smart and resilient. They’re in constant crises, so they become very adept at navigating and cash management,” she continued.

“We are trying to make our health services sustainable. Right now they are subsidized by financial services and donations,” she said. The 10 most important diseases are pretty similar across Latin America – diabetes, hypertension, most chronic diseases.

“We tried to make health care obligatory, but found the women didn’t like that. These women have choices – not dissimilar to here. Even though they are poor, they value some things, not others. As for health, if you don’t feel bad, you tend not to go to the doctor. Why spend money on it if I don’t feel bad? We have to focus on selling and marketing our preventative health services.”

“Many of our women are victims of domestic violence – hence the empowerment component,” Pérez said. “In a few cases the group has given support and women leave the abusive relationship.”

“But the best thing is to include men in the process,” she continued. “We have a whole methodology to engage husbands and children.

“At first, the husband may resist, but when the woman starts earning her own money, it begins to change the dynamic,” Pérez expained, citing an example of a woman in Mexico who had been sexually harassed while working at a water purification plant. “So she started a purification business, and her husband dropped what he was doing when it took off and now works with her, in a business employing 15 people.”

Photos:  Pérez with actress Salma Hayek, an avid supporter of Pro Mujer, at a recent Pro Mujer fund-raiser, and at the Clinton Global Initiative, where she was introduced by former U.S. Secretary of State Madeleine Albright.