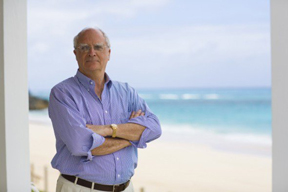 William Roderick Richards, who worked at Chase from 1969 to 1983, died Wednesday, November 16, 2011, while working in his garden by the ocean at his home in York Harbor, Maine.


Born in 1947, in London, England, he grew up in Oxford, England, where he attended the Dragon School and, after a stint at Rugby School, returned to Merton College, Oxford University, to read classics and philosophy.

After graduating, he joined Chase Bank in London and went on to work in Hong Kong, Indonesia, India and New York

He raised his family in Greenwich, Conn., before returning overseas with American Express to direct its banks in India and Egypt.

After retirement to York Harbor, Roderick lent his expertise to several area non-profit organizations, chairing RAIN for the Sahel and the Sahara, joining the board of trustees of Old York, and assisting the Heritage House project at Strawbery Banke Museum. He was a member of the Portsmouth Atheneum, The Oriental Club in London, The York Harbor Reading Room, and a former member of the Racquet Club in New York.

His indomitable humor and grace will be much missed by his wife, Kathy, son Roddy, daughter Elizabeth and her husband, Ethan Bing, and grandson William Barclay Bing. He is also survived by his two sisters and his father, William Edward Richards, in England.

A memorial service will be scheduled in the coming weeks. Lucas & Eaton Funeral Home, 91 Long Sands Road, York, Maine, is directing arrangements. In lieu of flowers, donations may be made in his name to RAIN for the Sahel and the Sahara, P.O. Box 545, Newmarket, NH 03857.

From Randy Earman: Pia and I send our heartfelt condolences to Kathy and Family on the passing of “Roddy”. I have wonderful memories of our time together in Hong Kong. A great guy, professional banker and fun to be with. May God always care for him.

From Lewis R. Brine: This is a huge shock to me. I send my condolences to Kathy, Roddy and Elizabeth. Roderick and I worked together in Africa when he was MD of Chase Bank Nigeria in Lagos. Boy did we have some chuckles. His obit neglected to mention his time in Africa. I am sorry to say the last time I saw Roderick he was in Cairo.

From Roger Griffin: I’d like also to add my condolences on Roddy’s passing to Kathy and other members of his family. I like to think of him as one of the most civilized and thoughtful people it has ever been my good fortune to meet, as having a great sense of humour coupled with a wonderful laugh and just being a terrific person to spend time with. Is my memory playing tricks or wasn’t he also variously responsible for the Metals & Mining team in what used to be called the Corporate Bank at Chase in New York and later running the Bank of East Asia’s U.S. business. Surely he must have had a more varied and interesting banking career than any of us who were lucky enough to be his contemporaries.

From Clare Bruder Mullarney: My condolences to Kathy and her family.  Roderick was head of the Mining and Metals group at Chase, taking over for the legendary Tony Coe in the early 80's.. I had the pleasure of being the non-ferrous precious metals team leader at the time of that transition.  Roderick was a wonderful fellow to work for...a gentleman of the highest order.  I recall how much he balanced the demands of his career with attention to the needs of his lovely wife and family. He left this world a better place for having been in it.  And he left us all too soon.

From Oliver Greeves:  I read with much sadness the news of Roddy Richards' death. I joined Chase at the same time as he did in late 1969. Later we were in the Chase training program in New York and stayed in touch as our careers in International took us in different directions. Our paths crossed in Asia, which claimed most of my career, and then again in New York where we were both division execs in the corporate bank for a few years. Later on when he was with American Express in Mumbai I met him as I was setting up an Indian company for MetLife. He kindly had me stay with him when my plane was delayed - sometime in the late '90s - I think.  That was the last time.  But it was a good time - full of laughs and memories. I am sorry that having moved to Australia our paths never crossed again. Roddy was the sort of person whose memory always remained strong even though we lived far apart. I always felt a great deal of affection and warmth for the friend with those twinkling eyes beneath bushy eyebrows and the rich steady laugh.  Kathy, Susanne and I feel greatly for your loss and send condolences to you and the family.

From Peter Gross: I was shocked to read the sad news, and both Sigrid and I are sending our heartfelt condolences to Kathy and her family. As we get older there are fewer and fewer people that stay in one's mind with happy memories of the past. Roderick is certainly one of them. The years we spent together in the African group in the late 70's and the Regional meetings in London in smoke-filled rooms are unforgettable. The last time we met was in Mumbai. As our expatriate lives went, we may not always have been able to stay in touch or meet again, but the memories stay on.

From Stephen de Got: I had left Chase NY for Asia when Roderick joined the bank. Lou Brine was kind enough to introduce me to Rod and Kathy as he knew they had moved into my neighborhood in Greenwich, CT.  Thus, I regularly imposed myself on them for coffee after a bike ride on a weekend. Having common experience in Chase was a great way to relate. Kathy reinvented herself from being a commercial banker a few times and became an author and could therefore be a part of a team with Roderick during his international stints with American Express while conducting her own businesses. Rod helped Bank of East Asia develop their NY presence and became a victim of a RE meltdown in Chinatown NY when they opened a sub-branch downtown. Angela Pricolo (my wife of almost one year) last saw Rod and Kathy during his second special assignment for AMEX and had a delightful dinner.  Kathy, I am very sorry for your loss. Rod will be missed.

From Surinder Singh: What a magnificient man! Roddy was the epitome of grace and humour. I remember his deep chuckle followed by that rumbling laugh, though there was no much mercy from him on the squash court in Hongkong! I first met him when he was the Chase representative in Bombay and then worked with him in Hongkong for a bit. As English as they come, with that mumbled, Oxford accent, I just wish that I had kept track. My deepest sympathies to Kathy and his children.

From David Weisbrod: Roderick and I were very close during the formative stages of our careers. I saw him most recently at lunch during his latest stint with Amex and he was in fine form; we compared notes on the weddings of our daughters; had many great recollections with his always hearty laugh and good spirit evident throughout. Roderick is one of a very small number of Westerners who visited my former Peace Corps village with me in Deurwana, Nepal.  It came at the tail end of a business trip to Nepal -- Roderick was the Chase rep in India and I was visiting from New York. Our visit to the village created a lifelong bond. I will miss Roderick greatly; we lost him too soon. My condolences to Kathy and the children.

From Nasser Galal: I’d like to add my condolences on passing to Kathy and other members of family –Mr. Roderick Richards was my MD at EAB -Cairo Egypt.