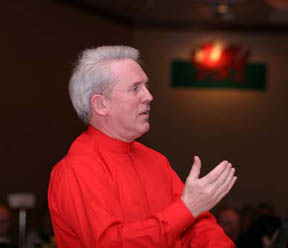 Banker with Music in His Portfolio

Wherever his banking career has taken him, Bryan Carter has made music a part of his life, as performer and supporter.

Now semi-retired in Hong Kong, he is singing in the Hong Kong Welsh Male Voice Choir, having been its musical director for seven years, and currently chairs the City Chamber Orchestra of Hong Kong. He serves as organist for an Anglican church in Hong Kong. And in his latest foray, Carter has become chairman of the Asian Board of the Wells Cathedral School, the only UK specialist music school that runs in parallel to a regular independent school. One of Carter’s goals there is to build bridges between Wells and schools in Hong Kong.

Born in Colchester, UK, he became a chorister at the age of eight. “Over the years music has always been very important," said Carter, 64. "At every location, I’ve joined a choir, either secular or church.” That would include stints in the Bahamas and Nigeria, where, he recalls with a laugh, he sang arrangements of hits from Kiss Me Kate on the lawn of the U.S. ambassador’s home with a choir of expats and locals.

“In the United States, I’m considered academically deficient. I left school when I was 16 and went into a British bank training program,” he explained. He started with Chase in 1971 on the operations side in the Bahamas, and was there until 1976. His two daughters were born there.

He came to New York and was part of the Overseas Operations Administration group. He was sent to Nigeria in 1977, which was a homecoming for his wife, as she, the daughter of an expat, had actually been born there.

Carter then went through the London credit training program in 1980 and moved back to New York with the Africa Group in 1981.  From 1986 to 1990 he served as group leader with credit audit and then became Dick Boyle’s personal assistant for three years.

In 1993, he recalls, “I was given a bit of a choice as to where to work. I told Dick I had never worked in Asia. He said, ‘Asia is a big place, could you be more specific?’ We were looking at Hong Kong’s return to China in 1997, and I thought it would be an interesting place to be.”

He worked in the Chase Private Bank in Hong Kong as a credit executive until his retirement in 2003.

He then joined Coutts Bank from London and for three years served as its chief executive in Hong Kong.  This was followed by a two-year consultancy with Coutts during which he helped design and open the first ever Private Bank in mainland China – a joint venture with the Bank of China.  He finally retired just two weeks before the crash of 2008.

“We elected to stay in Hong Kong in retirement,” he said. “All our friends are there and all the things I do outside of business.”

Since 2008 Carter has taught part-time in the MBA program of the University of Hong Kong and at Fudan University in Shanghai, lecturing on finance. A baritone, Carter joined the Hong Kong Welsh Male Voice Choir in 1995 and became musical director in 2003. The chorus was formed in 1978 by a bunch of Welshmen in Hong Kong. It now boasts some 70 members of a dozen nationalities.

As musical director, he was the ultimate arbiter of what the choir sings, but when the choir travels to participate in festivals, the repertoire is somewhat set.

And travel they do – to the Sydney Opera House, and in the UK, the Alexandra Palace and to London’s Royal Albert Hall, where Carter’s group twice sang as part of a thousand-voice choir. In October 2009, the group performed for the first time in Beijing.

“The choir changed from being a bunch of guys who wanted to meet and also sing to being a choir first and social group second. We’ve had to up the standard,” Carter observed. “We went through a period when the choir had an age problem on the ‘high’ side, but a lot more younger people are coming in. The youngest are in their early to mid-20s, the oldest in their late 70s.” The choir also went through a lean patch after Hong Kong was returned to China, as several of its members worked for the British military or government.

“Being musical director was as big a management job as any I’ve had in my career at Chase,” Carter said. “You’re managing egos of men varying in age and in every walk of life – judges, lawyers, bankers, teachers, policemen. It’s a very mixed cast, and of course it’s a volunteer operation.”

A monthly fee covers refreshments. The choir will get paid to sing at weddings. The choir rehearses twice weekly in the parish hall of the Anglican Cathedral in Hong Kong, so it’s a real time commitment. It needs to be, since the choir has some 60 to 70 pieces in several languages – including Welsh, English, French, Italian and Chinese – in its repertoire and performs without scores.

They give five to six public performances yearly, usually singing for a charity or latching up with a local charity. In Vietnam, the choir raised money for Operation Smile, in the Philippines, for the Street Children’s Home. Performances in Hong Kong usually benefit the students of the Hong Kong Academy of Performing Arts.

When the choir travels, the gentlemen pay their own way. “They’re allowed to bring spouses on some tours – to Europe and Australia – but in Asia it’s just a men’s weekend away,” Carter said. As for his wife, “she enjoys it and is very supportive, but is not a musician as such.”

As chair of the City Chamber Orchestra, the smallest of the three western professional orchestras in Hong Kong, his involvement is that of governance, not music. Carter noted the extensive government support for the orchestra, among other arts organizations. “The arts in Asia are an important part of life. All children are encouraged to sing or play something.”