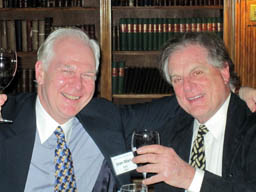 A Tasty Night at the Union League Club

There was perhaps no pleasanter way of shaking off the cold and Friday the Thirteenth (of January, 2012) than being at the stately Union League Club on East 37th Street, New York City, in the company of great wine, terrific Chase alumni and their guests, and out of the ordinary South American food.

With the New York cold season causing a number of last minute cancellations and no-shows, a group of 25 gathered to taste five wines from Chile and Argentina, chosen by Chase alumnus Frank Reider, author of Wines of Passion: The Best of South America.

Reider discussed each wine in depth, with references to topology, meteorology, blights, barrels, vintners and value. Guests were able to try:

The setting – made possible by CAA President John A. Ward, a member of the Union League Club – was another treat of the evening.  In addition to its stacks of books, the Club's library and its foyer boast a remarkable collection of toy soldiers and non-military Britains figurines, as well as ephemera, sculpture and prints.

Remember: Frank Reider will host a wine tasting dinner at his restaurant in Delray Beach, FL (GOL! The Taste of Brazil) on Thursday, February 2, 2012.  You can pay at the restaurant, but please RSVP to news@chasealum.org so that Reider will know how many to expect.