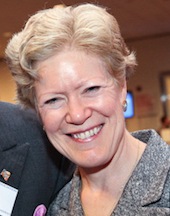 In her own career, Betsy Werley has made many transitions since graduating from Duke and the University of Chicago School of Law: from corporate attorney, at a large firm and then in-house, to the law department at Chase, to the business side at Chase to – when she was facing the age of 50 – the not-for-profit world, where she now runs The Transition Network (TTN), an organization helping women over 50 make the transition to the next act of their lives.

Her new job flows naturally not only from the skill sets she garnered from 11-hour days at Chase but from her volunteer involvements while she was there. She has always been active in and served as president of the Financial Women’s Association, and she provided leadership in the Chase Women’s Network. Werley has mentored about 15 people, both at Chase and at Baruch College.

She joined the Chase law department in 1987, to work on a series of credit card launches. She then moved over to retail investments, working on the first broker dealer products, including a cash management account.

“I was a lawyer on the team to develop the product, and then they were looking for a project manager to launch it,” Werley explained. “I thought, ‘What’s the worse thing that could happen if I jumped over to the business side?’ There’s a big wide world out there. I was always good at solving problems and making things happen, and here I could do it with a larger tool kit.”

As the Internet “got going” at Chase, she was appointed to a corporate-wide Internet task force. She moved into staff roles, helping automate procurement at the bank and then running a project to “get a handle on the consulting workforce, deciding who should be brought on board, who given control, and who should have access shut off.”

“I worked across the organization and got to know different processes and people,” she said. “I was part of a team that put together a team for its mentoring unit…and found I enjoyed having a leadership role in a mission-driven small organization.”

Her work on the consultant program was ending and she was facing what she called “fourth merger syndrome.” She took a severance package and left in 2005, at the age of 49 and three quarters.

She’d always told her mentees to network, so now Werley did. “I sent out a note, ‘I’m leaving…here’s what I’m looking for…’ Someone wrote back, ‘I’m on the board of an organization – you would be perfect.' I did not get that job, but I realized you have to tell everybody what you’re looking for, because you never know.”

Another contact led her to TTN, which had just gotten big enough to look for its first paid full-time director.

“For most of our members, careers were very central to their identity. They’ve reached a point where they say, ‘I have a lot of time ahead of me. What do I want to do with my talent, experience and energy?’ This was really the first generation of women in the workforce – there are no role models. We want to be the role models and leave a legacy to the next generation,” Werley said.

Some are seeking paid positions, others volunteer work. Others are ready to finally follow their muse. The age range is from the late 40s to 80, with a median age in the low 60s. Although there is no education requirement to join, 70 percent of members have graduate or professional degrees. “What they have in common is a pent up desire to see what’s in the wider world,” Werley said.

“Many of these women are tired of saying, ‘I am by far the oldest person in the room.’ The Network pushes the reset button. Age is not an issue.”

Chapters may have slightly different profiles, shaped by the local “champions” who founded the chapter. “Some chapters have more retirees. Atlanta has more people still in the work force. Columbus used to be mostly corporate but is now entrepreneurial. The NYC chapter is big enough that it has some of everything,” Werley explained.

Many of the women already belong to organizations and have communities of friends, but TTN, Werley said, puts the members in touch with women they might never have met otherwise, who enrich their lives enormously.

“The world of professional organizations is about success in a profession,” she said. “We help women find what else is out there.”

Two national meetings are held every other year to bring people from different chapters together. Members who travel are encouraged to meet members in other locations, and TTN is a boon to women who plan to move. “You can tap instantly into a community, which is especially helpful if you’re not working,” Werley observed.

About 60 percent of the membership has come through word-of-mouth. The Network enjoys a lot of media coverage, and a book from TTN – Gail Rentsch’s Smart Women Don’t Retire – They Break Free – has reached a lot of women.

Werley, noting that one quarter of America’s educated population is now retired, said she loves “being part of an organization that’s solving one of the big issues of our time…the mission is very important to me, inspiring in a different way.”

“I tell people who might be thinking about non-profits, you acquire so many skills working for Chase – computer skills, best practices in many areas, change management, communicating at different levels. These skills are incredibly valuable to small and medium-sized organizations that don’t have the resources to train people. You’re really valuable to them,” Werley said.

She hopes to add more TTN chapters, to reach 25 in three years. She wants to develop a “transition curriculum” that covers what kinds of things women in transition experience, and how to move through a transition.

“And then I want to take the talent and energy of our members and turn us loose on the larger world,” she said, "to look at the world of work differently, asking if there are new roles, new ways to think about education and how we get ourselves from here to there."

Werley invites Chase alumnae over 50 to explore TTN: www.thetransitionnetwork.info, and recommends to men and women alike what she calls two seminal books by Marc Freedman: Encore: Finding Work that Matters in the Second Act of Life, and The Big Shift: Navigating the New Stage Beyond Midlife.