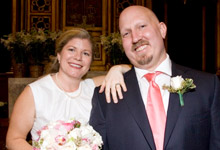 An Innkeeper on the Jersey Shore

How many of you have fantasized about running a B&B?

With her husband, Mary Ellen Georgas-Tellefsen – ex-Chemical, ex-Chase – is about to complete her second year as proprietor of The Sea Spray Inn in Ocean Grove, NJ, “the jewel of the Jersey Shore”.

She took some time from painting baseboards of the 1872 Victorian to talk about her move from corporate America to running an inn.

“It’s obviously a great change, and it’s more work than people think it is,” she said. “The range of work is tremendous and varied, but the tradeoff between this work and sitting at my desk in front of a computer creating a spreadsheet is fantastic. At the end of the day, our goal is just making people happy.”

Right after earning her MBA from NYU’s Stern School of Business, Georgas-Tellefsen had a summer internship in direct marketing at Chemical Bank – post merger with Manufacturers Hanover. She was then hired to work for consumer market management – a segmentation-based group in the retail bank. “I loved it. I had great managers, and this was new stuff in banking at the time,” she recalled.

But she “followed the money” and left for MasterCard, which she characterized as a “young career mistake”; the job lasted a year, and she found it less than fulfilling.

Georgas-Tellefsen followed one of her Chemical managers into retail bank consulting, and then worked for some dot-coms prior to the bubble bursting in that sector. She ended up back at Chase in 2002, as a VP in the retail bank online banking group, working for JoAnne Glazer and enjoying the job and group.

“And then came the BankOne merger, and everything changed,” Georgas-Tellefsen said. She went over to Treasury for a while to work on the JPMorgan Access team, but parted ways with Chase in 2005, returning to independent consulting.

When Georgas-Tellefsen married her husband, Eric, in 2008, he had already stared down some dark corridors: He had worked in Tower One and survived 9/11, been in the IT department at Lehman Brothers when it went under and recently survived a life-threatening illness.

“You think more deeply about what matters – it’s not about the money any more,” she said. Meeting and marrying him brought her own discontent and dreams into sharper focus.

“When I met my husband, we were both burnt out – tired of the commute and the politics,” she recalled. “We were both ‘Shore’ people. We had long conversations about what kind of life we wanted and what we should do. While we were having those conversations, we walked by an inn that was for sale and said, ‘Aha – we’ll live at the beach and make breakfast for people’.”

The newlyweds looked around for a property and found The Sea Spray Inn, which had been lovingly upgraded by its most recent owners. The Tellefsens only had to redecorate the living room and dining room; the eight bedrooms, each with private bath, were in turnkey condition and good taste, providing both charm and comfort. “We’re happy this is the place we ended up and that this is the house where we make our home,” she said.

Georgas-Tellefsen had a cousin with an inn in Massachusetts who had given her “the good, the bad and the ugly” of an innkeeper’s life, but Georgas-Tellefsen is still struck by the constant amount of work required: “There’s always laundry to be done, a bed to be turned over, a wall to be painted, weeds to be pulled,” she said. “When your house is your business and you need to maintain to high standard, there’s always something on the to do list.” 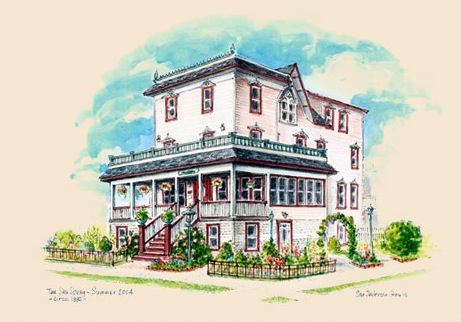 Ocean Grove, just an hour's drive from New York, has the highest concentration of authentic Victorian architecture in the United States.  The Sea Spray Inn, which TripAdvisor rates as the best inn in Ocean Grove, is now famous for Georgas-Tellefsen’s fabulous breakfasts, with a signature crumb cake just one of the factors bringing repeat visitors.

“Baking was always an outlet for me, but more of a passion. I never thought about how I could monetize it,” she said. “Having a B&B is the perfect mix. I get to bake and take care of my baking fantasies, but it’s not so overwhelming that I’m sick of it, as I might with a retail bakery. The satisfaction comes from people really enjoying what I make.”

While the former owners were only open in the summer season, the Tellefsens have opened the inn year-round.

“We have felt somewhat chained to the house, but you learn when you have to be there and when you can leave,” Georgas-Tellefsen said. “During the summer, either my husband or I am here all the time. Our guests have questions, or potential guests want to have a house tour. Off-season we can get away and do what we want to do, but May through October we are always here.

“It was a big risk – the big question mark – as to whether we could work together all the time, and it’s been the big ‘phew!’,” Georgas-Tellefsen said. “We’ve both found things we like to do and complement each other. And with eight bedrooms on the second and third floors,and going up and down those stairs, we don’t have to worry about a gym membership.”

The couple live with at least two other major risks to a B&B a block from the ocean: Hurricanes and recessions. Although they were fully booked and forced to evacuate last fall during Hurricane Irene, the inn was spared any real damage. And though they never thought of an inn as a recession-proof business, the inn’s occupancy rate has only increased since they took over in March 2010.

“We get people who don’t want to commit to a summer share or don’t want to fly or don’t feel comfortable leaving their jobs for a whole week,” she observed. “They can come here for a weekend and feel they’ve gotten away from it all.”

Most guests come from New York, New Jersey or Pennsylvania, but in the summer The Sea Spray also attracts many Europeans. Last summer saw guests from Germany, Italy, France, Switzerland and Denmark. Georgas-Tellefsen has no war stories of miscreant guests. She has hosted a number of former colleagues from Chemical and Chase and remarked how “weird it is for us to see each other in such a different context.”

The Tellefsens have a mercantile license for the inn as well as an innkeeper’s license, since at one time the inn had a restaurant. They’ve thought of opening a soda shop or even a restaurant but have “wanted to make sure we could run the inn well before we dove into something else.”

“I did a lot of entrepreneurship stuff at NYU Stern and Chase, and I’m taught to think about maximizing resources, but the flip side of me said we came here to have a simpler life,” Georgas-Tellefsen said. “We want to be able to go to the beach in the afternoon.”

“People think we’re living the dream, owning our own business, but there are trade-offs. There are no meetings I have to go to, no spreadsheets or PowerPoints to produce, but we work hard for what we make and it all goes back into the business… If you think you’re going to love doing it, you’ll be successful at whatever it is.”

The Tellefsens say they’ll offer special rates for Chase Alumni. Give them a call at 732-897-0700, or visit www.theseaspray.com.