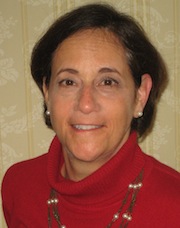 They called Russell Berrie the “King of Trolls”, for the fortune his toy company made off those beguilingly hideous novelty dolls that were a fad in the 1960s and 1970s.

Ruth Salzman, who remembers troll dolls from her childhood and Berrie as a significant middle-market customer of Chemical and Chase banks during her adulthood, is now running the foundation that bears the late toy magnate’s name.

“Russ was a guy with a golden gut,” she said. “He was someone who was able to see beyond the next bend in the road and willing to make an investment that was meaning to be transformational.”

alzman, who left Chase in 2006 as Senior Vice President of Commercial Lending & Investing within the Community Development Group (CDG), now has the good fortune to be able to shepherd the Foundation’s giving. The Russell Berrie Foundation is a private foundation located in Bergen County, NJ, and focuses on four major areas: Jewish renaissance; diabetes and medical innovation; professional sales, and community giving.

“Every foundation wants to be transformational,” she said. “We want to know that the world is going to be significantly different because of the investments we’re making.”

In a way, Salzman's banking career could be called transformational.

She began in the middle market not-for-profit group at Chemical. “The marquee project was the 1986 renovation of Carnegie Hall. It was an amazing, terrific wonderful signature experience,” she recalled.

She was then asked by the head of middle market to work with smaller groups in a job that ultimately became defined as Community Development “and set the trajectory for the rest of my banking career,” she said. The bank developed a business around Community Development Financial Institutions (CDFI), intermediaries that were officially created during the Clinton Administration.

“The Bank’s objective could be leveraged by working with intermediaries that knew languages and communities we didn’t know but had very high standards, so it was not throwing money over the wall. We built a business on lending to CDFIs. It increased our reach and it was great for community redevelopment. The Federal Reserve was the redevelopment program’s regulator at that time – and made what we did in that sector a big part of our getting the highest rating.”

The program ended up being mainstreamed into the Small Business Administration. “We were recognized as new markets lender of the year, for using the program to reach low-income communities and underdeveloped markets. A lot of banks did SBA lending, but Chase was the top SBA lender in the country. It gives me great pleasure that we were recognized for reaching where we did.”

Salzman also initiated and managed the socially responsible investing program at JPMC. In aggregate these activities resulted in over $1 billion being provided, through loans and investments, to customers that the bank’s mainstream business units did not reach.

In the beginning of 2006, Salzman’s job was eliminated, “for kind of a good reason – the businesses I was responsible for had gotten to the point they could be mainstreamed,” she said. “I wasn’t happy, but I could understand the business rationale.”

Then came the call: She was recruited in 2008 to run the Russell Berrie Foundation, recommended by a colleague who sat with her on the board of the Primary Care Development Corporation (PCDC).

“A few things made it likelier and had laid the groundwork,” she noted. “Within the bank, I had been able to pursue a career that allowed me to put my business skills to service in the nonprofit sector. Both at Chemical and Chase, there was a real understanding of nonprofit being a market. Also, I had concentrated in healthcare administration for my MBA at Wharton.”

While Salzman had her consulting practice, she was contacted by Peggi Einhorn – a former Chase colleague and, like Salzman, a participant in the David Rockefeller Fellows program of the Partnership for New York City.  Einhorn invited her to spend a day at the Robert Wood Johnson (RWJ) Foundation, where Einhorn was CFO.

“I had a chance to see the world of philanthropy,” Salzman recalled. “I spent an hour with their president and the person who does product development…there was a consulting opportunity in in one of the RWJ contracts that related to childhood obesity work. They recognized they needed a community development voice.”

“It was a wonderful example of cross-fertilization, and an example of how the Chase network works," she added.  "It also got me thinking about philanthropy and made me willing to have the conversation when I got a call from the recruiter. I might have otherwise said reflexively, ‘It’s not what I do.’”

Salzman noted that not every single grant can be transformational, but she points to three particularly transformative grants made by the Russell Berrie Foundation:

“Interfaith understanding has moved from being a nice thing to do to being something necessary in the 21st century,” Salzman said. “We’re helping the next generation of theologians and clergy and academics…to have an authentic understanding of other religions and where they fit in the world they are confronting. This goes beyond Catholic-Jewish relations.”

Asked what direction she wants to take the Foundation, Salzman laughed. “I live to serve,” she said, noting that the Foundation’s trustees, including Berrie's widow, are extremely active.

“We have a commitment to refining our strategic priorities,” she said, adding that the foundation will sunset early in the 2030s.
“We are working on a delicate set of questions: What is the legacy we want to leave? How do we fulfill the mission Russ left to the trustees and foundation?”