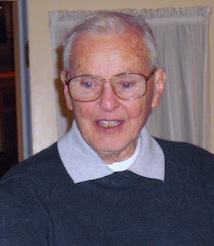 William T. (Bill) Heath died at his home in Babylon, NY, on February 11, 2012, after a long and increasingly arduous decline.

Heath began working in the Chase corporate tax department in 1965 and retired in 1984.  He consulted for the bank for another seven years, until 1991.

According to Tom Lynch, Heath served in the U.S. Air Force in the 1950s, stationed in Alaska, "making sure the Soviets didn't try to cross over from Siberia. It was boring and he never wanted to go back."  After the Air Force, Heath went to CUNY at night and worked during the day.

During and post Chase, Bill taught correspondence courses in accounting for the ABA &/or New York State Bankers Association," Lynch recalled.  "He may have taught classroom courses, too. He loved accounting. After retirement, Bill took up reading to children in his local elementary school much to the joy of both children and teachers. He read them stories that would inculcate values. A favorite story was The Empty Pot by Demi, a tale of a Chinese Emperor looking for a worthy successor –- a copy of which was given to Bill's widow carrying signatures of all the teachers at the school and lots and lots of the students. More kids recognized Bill in Babylon, Long Island, than recognized the mayor."

According to his daughter Patricia, who works for Chase, "He continued to do tax returns until about 6 years ago (all by hand), he was proud of the fact that he did not know how to turn on a computer."

Heath is survived by his wife, two sons and two daughters.

From Patricia "Trish" Comey Preston: I worked for Bill for a stint in Chase International Accounting.  He was a wonderful leader and mentor.  He always made a point of calling me Patricia and not by my nickname, Trish.  Bill's reason was that my parents named me Patricia so I should be called Patricia.  Bill always had a smile and was very supportive of us "new" accountants.  I remember those years in Corporate Controllers fondly.

From Mary Hansen Cella: Bill Heath worked with my father, James Hansen, who worked for Chase from 1950 to 1989 in the Controllers area under Mike Esposito.  My father always spoke very highly of Bill.  They rode the long daily ride on the  Long Island Rail Road to work together when their schedules coincided. I  also worked at Chase Plaza in the accounting area in the 1970s.  Bill was very friendly and respectful to all.  In sympathy...

From Fred McCarthy: I was privileged to work with Bill for most of my career either directly or indirectly in the Corporate Tax area. I will always be grateful for the experience, education and opportunity he provided to me. Bill was a great asset to the Controller's area and to Chase in general as a leader, "rolled-up sleeves contributor" and most importantly as a person who was widely respected at all levels of the company. Condolences to Bill's family.

From Petrina Di Gangi: I remember Bill fondly as one of our leaders when I first joined Chase Manhattan.  He was always there to guide us as we navigated our way through Corporate Controllers.  My sincere condolences to Patti and the Heath family.  My thoughts and prayers are with you.

From Mike Esposito: I had the honor and privilege of working with Bill Heath for over 25 years in the Chase Manhattan controller’s department. Bill worked both in the corporate tax division, the international taxation section and the international accounting section of the accounting division.
Bill was a hands-on professional, with a solid work ethic, devoting long hard hours to the betterment of Chase Manhattan and its financial statements, including from time to time a Saturday and a Sunday. His had a remarkable and dedicated working style that was hard to surpass and he was a great teacher for young people joining the controller’s department. Bill was an expert in the field of international taxation and understood all the intricacies of the relationship of international taxes to the accounting systems of Chase. He had a very workable and easy style of explanation when dealing with complex matters.
Bill Heath loved the game of football, both college and professional, and each year for approximately 15 straight years, Bill and I had occasion to attend the memorial annual Heisman trophy banquet.
Bill was always very willing to help any individual at Chase who required help in finalizing his own personal income tax returns, including my own.
I shall never forget this remarkable individual and his likable ways. He was a great friend and I enjoyed having a beer or Chinese food with him from time to time. My deepest sympathy to the entire Heath family.