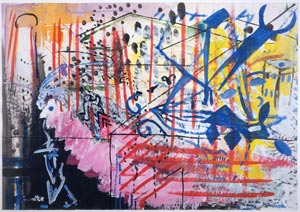 The Art of Chase and Home

For 25 years, Stacey Gershon was involved with what is now known as the JPMorgan Chase Art Collection, beginning as a registrar in 1982 and retiring as senior curator.

Now she brings that expertise to private art collectors – but she can go a bit wilder in suggesting artworks for acquisition.

The JPMorgan Chase Art Collection began in 1959 when David Rockefeller, then president of The Chase Manhattan Bank, established the firm’s art program and took the lead in the field of corporate art collecting.

Rockefeller and the architect Gordon Bunshaft of Skidmore, Owings and Merrill, designer of 1 CMP, sought to integrate artwork with the architecture of new Chase corporate offices around the world.

Gershon noted that the Art Collection was part of the marketing communications and called in “an extension of philanthropy, in a way.” “The intent was always to purchase museum-quality art by younger emerging artists and artists in mid-career – not at the top of the art market,” she said. Employees’ and visitors’ appreciation of art – not appreciation in value – was the goal.

For a long time Skidmore was involved in every Chase building that opened, Gershon said, and they interiors were designed with the expectation that local artists’ work would be displayed in each.

When Rockefeller was still involved in the art committee, the curatorial staff would make proposals for major pieces and he would “bring his discoveries,” Gershon recalls. The initial art committee included Rockefeller, Bunshaft, several senior bank officers and Dorothy Miller, the first curator at the Museum of Modern Art.

“We gave many younger artists an opportunity to show their stuff worldwide, gave them that little shot in the arm,” Gershon said.

Asked which artists were discovered early who have gone on to big careers, she cited Jim Hodges and Carol Beauvais, who now show at major galleries.

“Jim Hodges was an installer for us, and then we bought a lot of his drawings. At the time, they went for $250,” she said.

Gershon said that she would sometimes censor her own taste – “maybe not as much as I thought I had to” – in selecting works, acknowledging there were certainly some the bank would not purchase.

In her last years at the bank, her buying budget was $1 million to $2 million. “We bought for a new building in Jersey City, a huge building in San Francisco and another in Florida, but usually we were just handed a budget without working with a facility,” Gershon said.

From time to time works are given to a museum, but works from the collection are rarely sold.

During her 25 years at Chase, Gershon saw the collection grow from about 5,000 pieces to over 36,000. Much of that growth came the way the bank has grown – through mergers and acquisitions. Along with the banking operations of Chemical Bank, Manufacturers Hanover, BancOne and JPMorgan came their art collections, mostly works on paper.

“There are some fine works in each collection,” Gershon said, adding that the core Chase collection was a bit more cohesive and bold. She said that the First National of Chicago collection, which became the BancOne collection, “has some mighty hitters.”

Her advisory business, Stacey Gershon Fine Art, concentrates on modern and contemporary art. “There are not so many constraints on what I can recommend,” she said. “It’s a matter of what the client likes.”

“At a certain level, you’re educating people. You’re working together – it’s a collaborative process,” Gershon said. “My clients are usually bright people with good taste, but they don’t get to see as much as I do. Sometimes I teach them how to look at art.”

“Some people want to buy a piece of art because they love it, and some think of art as investments as well,” Gershon continued. “The fun for me is I get to do a bit of everything, and each assignment is different. You help them on their journey…Everything is not for everybody, and it may take someone a while to figure out what they like.

Gershon charges by the hour and helps clients with huge budgets down to “one young guy who has a small budget of $15,000 a year to buy art. I know that might be a big budget for some people.”