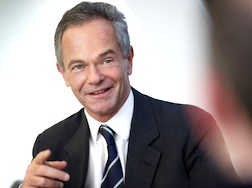 Profiled in a May 15, 2012 Financial Times special report on Vienna as a financial center, Chase alumnus Andreas Treichl was described as “Austria’s best-known and most international Banker.”

FT reporter Haig Simonian wrote that Trechl “is not just a distinguished figurehead for finance. As the country’s best-paid banker, Andreas Treichl, chief executive of Erste Group, has become a lightning rod at a time of almost universal 'banker bashing' in Europe…But he is also a trenchant critic, unleashing periodic bolts against the paralysis of the Austrian political system and the dangers that holds.”

He began his career at Chase Manhattan Bank in 1977, which sent him to Brussels from 1979 to 1981 and Athens from 1981 to 1983. He did his first stint at Erste Group Bank from 1983 to 1986, leaving to return to Chase as General Manager for Chase Manhattan Bank Vienna, which was then purchased by Credit Lyonnais in 1993.

Asked if there was anything he would clarify or change in the FT coverage, Treichl was his apparent frank self.

“Local politicians are bitching that I’m bitching about the country,” he said in a brief interview at his Vienna office in which many headline issues were touched on. “We have to do everything we can to attract financial advisors to Vienna. London is doing a good job. The UK is tough on its bankers – in some instances a bit rough – but they’re protecting the interest of the City of London. They have a deep-rooted and historic interest in keeping London as the center of finance.

“But too much intellectuality is going into banking regulation,” Treichl continued. “Regulation has become too complicated to understand. Within Europe, Great Britain is the only country I see keeping a financial center. There’s a lot of talk elsewhere, but the political actions are much more geared to cater to clients than to financial institutions. Instead, financial centers will grow in the Emirates and in Asia.”

Asked what his Chase experience meant to him and how it trained him for his current position, Treichl first expressed amazement that “the community of Chase bankers is still around and has an emotional base.”

“What I learned at Chase was credit – though when you look at the format of banking in some countries, you might question whether I learned a lot,” he said with a laugh, in an unspoken reference to Erste investments in Hungary and Romania that contributed to Erste Group's taking a €2.3bn charge to clean up its balance sheet in 2011, giving it a loss of more than €700m for the year.

“Chase was an outstanding school,” he continued. “It taught me how to work in a team, how to respect hierarchies. It showed the difference that came from having some kind of modesty – something some senior managers in the bank lost later in my career. How to treat people in foreign countries – how important it is to respect local culture and what a big mistake it is not to really try to understand it.”

“I learned from things that were admirable – but also from things Chase screwed up,” he said.

“I learned how very important it is for the people who work for an institution to be proud of it.  I was so incredibly proud of being a Chase banker,” Treichl said, adding sotto voce, “I remember when I went into the training program how I looked down on Chemical – and then they took over!”

Treichl comes from an Austrian family eminent in the financial world and studied Economic Sciences at Vienna University from 1971 to 1975, but his life in banking was not inevitable.

“I actually wanted to go into music – conducting – but a very famous conductor with whom I'd worked said, ‘It’s much better to be a mediocre banker than a mediocre conductor.’” The conductor? Leonard Bernstein.

Music remains important to Treichl. Asked what he tends to read, he brought out a biography of Liszt. Treichl still plays the piano and is proud that his three sons – aged 14, 12 and 10 – are studying as well. His wife, Desirée Treichl-Stürgkh, a writer on lifestyle topics, chairs the Vienna Opera Ball.

Asked what had occurred during his career that he would never have anticipated, he quickly answered, "I could never have imagined that bankers would lose so quickly their reputation in such a dramatic fashion.  Politicians have managed to broaden the scope of that loss.  Banks do carry a responsibility for what happened in 2008. Many behaved extremely well, many extremely stupidly.  As a profession the job we did [on how to deal with the issue of the deterioration of our image] was abominable."

"We have to be a lot stronger to make people understand us again," he continued.  "You hear so much about bankers – and it's the fault of bankers and regulators:  Not even the referees understand the rules any more.  We must regain trust from investors, including professional investors, and make sure that 2008 will never ever happen again and we will never eat again into taxpayers’ money again."

Treichl said that regulators are finding umpteen ways to make the banks safe without really understanding "what kind of banking do we not want to have anymore."

"Banks have to take risk.  If not able to or willing, economies will not grow," he remarked. "Our task is to make people understand that what we do as commercial bankers is taking risk."

Asked whether JPMorgan Chase's recent whale of a loss was a matter of reasonable risk, Treichl immediately praised JPMC Chair Jamie Dimon.  "He admitted that a mistake was made and said he'd do something about it.  For all the talk about him, he did something a politician would never do – say, 'I did something really stupid.'"

What about the other litmus tests: Austerity or growth? Keep or disband the eurozone?

"Growth - of course," Treichl responded. "Merkel – everything she says is right, it's just not doable, and wisecracking by European politicians is making people feel more insecure."

"Whether we break up the euro or keep it, we will pay for it," he said.

As for the future, he sees regulatory pressure forcing banks to move a lot faster in technological advances that will result in cutting branches and staff.

"There's pressure to speed up the cyber world/digital capacities, or at the end regulatory requirements will make it more difficult for banks to be bankers to people. We will be digital bankers, not relationship bankers...but a lot of things I like about banking is having to deal with people and really taking care of them."