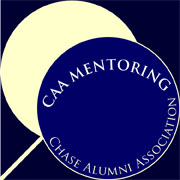 The CAA Mentoring Initiative has hit the ground running, with 12 mentors and 13 mentees (including seven of the mentors, who want mentoring in areas other than their expertise).

CAA President John Ward, who has himself agreed to be a mentor, kicked off a meeting of all participants on May 24, 2012 in the board room of McGladrey, 1185 Avenue of the Americas. CAA member Barbara Frankel provided training for the group.

The expectation is for a three-month mentoring relationship, with four to 10 hours of mentoring per month, Frankel said.

Frankel developed and facilitated the mentor/mentee training. A veteran of 11 years at Chase in Human Resources, she has been a leadership and executive coach for many years, specializing in transformational leadership, onboarding, career management and relationship building.

Kinberg said the program plans to add two or three mentors and mentees who expressed an interest in participating but could not make the meeting. They will be provided training by phone.

The next step, Kinberg said, is for mentors and mentees to get together and establish objectives, milestones and how they plan to work and communicate with each other. A conference call is scheduled for June 13 for all the participants to share and seek guidance, and the group will probably assemble again at McGladrey in mid-July.