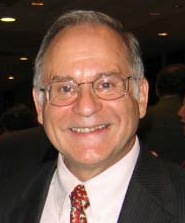 So it isn’t the Olympics.

So he didn’t even medal.

But Fred Zamon, 70, is darn proud that he completed five events in three days at the FINA World Masters Championships in Riccione, Italy in June 2012.

It’s all the more remarkable given that Zamon, who worked for Chase from 1968 to 1974, didn’t even take up swimming until he was 40.

He was working in trade finance in St. Louis, Missouri when his younger daughter, then 8, got into swimming. “Since she had to be at the pool at a godawful hour, my wife said, ‘Why don’t you drive her there?’ We’d leave at 5 am! I had started swimming to recover after I had some surgery. My wife suggested that I swim with the Masters group at the pool before my daughter started her practice,” Zamon recalled. “And so I got into it. At first I could hardly swim 10 lengths of the pool and suddenly I became addicted.” His daughter, on the other hand, “dropped out of swimming and got into theater.”

Zamon worked on his butterfly and breast strokes and found swimming a great way to to cope with stress and stay connected with younger folks.

He moved to the Washington, DC area in 1985 and joined a Masters group there. A lot of the men he swims with were Olympic swimmers and college champions. Zamon clearly swims for the fun of it and the endorphins released by it and is good humored about his relative prowess.

“I’m one of the old guys,” he said. “In our age group, if one guy shows up, he gets first place. When there are more than three people in my age group, there’s small chance I’ll win something.”

At the World Championships, he admits, he came in dead last in the 400-meter Individual Medley. “The U.S. team had the event covered: We came in first, second and last.”

He also noted that with his time of 9 minutes, 37 seconds, “that means that Michael Phelps is only twice as fast.”

Phelps, however, is a bit taller than Zamon, who stands five feet four-and-a-half inches. “Swimmers with a seven-foot wingspan tend to go faster,” Zamon acknowledges.

At Riccione, more than 9,700 competitors competed in swimming, diving, synchronized swimming, water polo and open water swimming. Contestants compete within five-year age brackets, beginning with 25-29 and going up to 90-94 “and five year age increments as high as necessary”.

Zamon “felt like an Olympic trial person” at Riccione, waiting to swim several heats and races in a short period of time.

In the 100-meter butterfly, the last of his five races, he missed the qualifying standard by three seconds. “I swam next to a one-armed Japanese guy – and he killed me!” Zamon said.

Out of the pool, Zamon has spent the last decade as a project manager for RER Solutions, Inc. in Herndon, Virginia, where he is currently working as an outsourced claims processor for U.S. Export-Import Bank. At Chase, his work included stints in the Netherlands Antilles and Liberia. (Zamon has a BA in government and international relations from Georgetown and an MA in African Area Studies from American University.)

He’s most looking forward to seeing the 400 IM event at the upcoming Olympics. “The 400 IM is what I love to do. The fact that I finished it in at Riccione in the allowable time is probably the highlight of my swimming…that’s a gut race. To see those guys swim it at full bore and know at the end there’ll be a silly millimeter between the guys is almost heartrending. For sheer speed, I’ll also want to see the 50 meter freestayle, just to see how fast they can go.”

Zamon will have his next “pre-Olympic competition” on July 22nd in Washington, DC.

As part of the U.S. Masters Swim Club, his local club has a coach. They train three days a week, perhaps a bit more in the summer. Zamon swims 7,000 to 9,000 yards a week.

Back in March he turned 70 on what happened to be a regular workout night. His children and grandchildren came to watch, and he swam, primarily butterfly, 71 25-yard lengths, each in a minute.

Zamon said he sometimes comes home and complains that he hurt all over, “and my wife will say, ‘Fred, stop complaining. Guys your age have been dead for years.’”