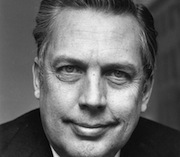 The banker succeeded David Rockefeller as CEO in 1980 and as chairman the following year. Under their tenures, the company expanded to operate in more than 50 countries, including Russia, Egypt and China, where U.S. banks hadn’t previously done business. By the time Butcher retired from Chase in 1991, the firm employed 41,500 people, according to a statement from Seitel.

“I am deeply saddened by the news of Bill’s passing,” Rockefeller said in a statement. He “worked tirelessly to enhance the bank’s position around the world.”

In 1947, Butcher joined Chase National Bank, a forerunner to Chase Manhattan, and later headed retail and corporate business for Midtown Manhattan, according to Seitel’s statement. Moving to Chase’s international department in 1969, Butcher oversaw operations in Europe and sub-Saharan Africa and eventually took broader roles, including a stint as the firm’s vice-chairman for worldwide planning, expansion and diversification.

In 1972, he became president and chief operating officer of Chase, reporting to Rockefeller, who was chairman and CEO.

An American history buff, Mr. Butcher once likened his fierce devotion to Chase to Robert E. Lee’s undying loyalty to the South. “No one should go into the chairman’s role,” he said, “unless he is willing to devote his life to the organization.”

A burly man with a booming voice, Mr. Butcher became a leading critic of the hostile takeovers and junk-bond financing that had come to characterize the 1980s on Wall Street.

“A lot of these ‘leveragers’ and ‘greenmailers’ are undermining the fundamental structure of our economy,” he said in a 1985 interview. “Other than maximizing short-term profits for the speculators, these activities don’t add any intrinsic wealth to the country.”

Butcher was born Oct. 25, 1926, in Bronxville, New York. He started his college studies at Middlebury College before a stint in the U.S. Navy. After his military service, he enrolled at Brown University, graduating in 1947 and later serving for many years on its board.

He served on boards at Celgene Corp., Firestone Tire & Rubber Co., International Paper Corp. and Texaco Inc. He was also a board member of the American Enterprise Institute, New York City’s Museum of Modern Art and the New York Zoological Society.

He was widowed twice. He is survived by his wife of 33 years, Carole McMahon Butcher, three daughters, two sons, and 11 grandchildren.

Alumni wishing to share tributes or remembrances should send them to news@chasealum.

From Gene Swanzey: A good man who represented Chase well. I spent a fair amount of time with Bill in Washington and learned much from him about how to be strong on a position but in a civil manner. My fondest memory of Bill was our trip to Richmond, Virginia, when we met with the Governor, offering the placement of back office facilities in exchange for the right to open branches during our interstate expansion days. He reveled in politely lecturing the citizens of the heart of the South about little known facts regarding Robert E. Lee: Big New York banker, a Northerner, invading the South, but they loved him. I worked with Bill a great deal regarding his volunteer work in New York City and Washington, DC. In particular, he took on the challenge of resurrecting and revising the American Enterprise Institute. Thanks to Bill's hard work, the AEI today is one of the most profound think tanks in the world. And, against my judgement, he took on some strange endeavors that the Mayor of New York asked of him. I originally thought that his chairmanship of the Anti-Graffiti campaign would be a waste of his time. He proved otherwise and the City benefited from his work in helping to change the tenor of the City. Lastly, he always jokingly remarked about how I never failed to get him lost during our rounds to Capitol Hill, the Fed, Treasury, White House. Thanks to him, I now know where some of these places are.

From Hiroshi Aiko, Chairman of the Chase Alumni Tokyo Branch,1980-1988: Sorry to hear about the passing of Bill Butcher, former Chairman and CEO of the Chase Manhatta Bank, who visited the Chase Tokyo Branch a couple of times.  Please send my condolences to his family.

From D.P. Ahuja: I knew Bill Butcher and met him in 1988 in Bahrain. He was a nice person. His third wife is also a wonderful person. May God bless his soul and give peace to the family members.

From Brahm Nirgunarthy: I am very sorry to hear the death of our Chairman Bill Butcher. I have fond memories of him as our leader. May his soul rest in peace and our thoughts and prayers with his family.

From Theresa Hasson:  Sorry to hear of Bill Butcher's passing.  I worked in most of the Systems areas at Chase from 1969 thru 2003.  I joined Foreign Exchange in the 1980s.  I was privileged to have met Bill on two occasions.