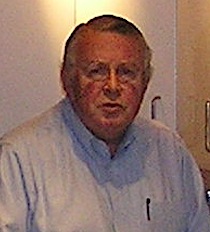 Rudolf (Ruud) Kerkhoven died in the Netherlands on August 27, 2012.

Ruud came to Chase via the acquisition of a Dutch bank in Hong Kong. He was selected to attend the Credit Training Program in 1967, but elected to return to the Far East before finishing the program.

He spent time with Chase in Saigon and Djakarta before leaving the bank to join Citibank and return to the Netherlands. He retired from Citi six years ago.

I have lost a great friend, a friendship going back to our youth, which continued until the very end.

Anyone wishing to write to Anna, Ruud's widow, should contact her at Koepoortstraat 23, 6981 AR Doesburg.


Alumni wishing to share a remembrance should send it to news@chasealum.org.