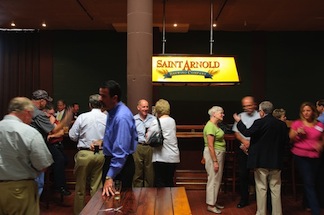 If you hold a reception in a brewery, chances are a lot of beer will be consumed.

The Houston chapter of the CAA, communing at Saint Arnold's Brewing Company, did not disappoint.

Ken Jablon, CAA Board Director, and his wife, Ann, attended the reception. Jablon said that about 40 individuals attended, including a number of new faces. Some of the new attendees joined the CAA and received free admission and the gift pack of 125 Saint Arnolds coasters, as did all the other CAA members.

"Everyone was very happy with the venue, particularly the room and the six craft beers on tap," Jablon said. "A number of the attendees said they would tell their Chase friends about it, to get them to come next year."

You can also view and order unedited photos from the Web site of the photographer, Steven David (Houston Event Photos).