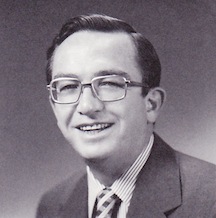 Jim was born on February 28, 1931 in Carlsbad, New Mexico. Following his college years at Princeton and a tour of duty in the U.S. Army as an artillery officer, he earned an MBA from the Harvard Business School, graduating in 1958.

After employment at Texaco and Marathon Oil in their international divisions, Jim joined The Chase Manhattan Bank in 1966 and remained there in a variety of senior executive positions in international banking until his retirement in 1988. His responsibilities at Chase included serving in Hong Kong as Regional Director for South and Southeast Asia. He then returned to New York, where he served as Area Director for Asia-Pacific and also for Africa. Jim subsequently served as Executive Managing Director of Chase Manhattan Capital Markets Corp. and as CFO for global affairs at Chase Investment Bank.

Despite suffering a partially disabling stroke shortly after his retirement, Jim remained active in the Princeton community as a member of the Nassau Club, the Springdale Golf Club and the Chase Alumni Association.

Jim is survived by his wife of 46 years, Elisabeth, his daughter and son-in-law, Sondra and Fred Grant of London, England, and his son, Michael Bish of Santa Cruz, CA.

A private memorial service was held in early 2013 in Princeton. Donations in lieu of flowers may be made to the Princeton Hospice Memorial Fund, 208 Bunn Drive, Princeton, NJ and The Lewis School, 53 Bayard Lane, Princeton, NJ.

Jack Taylor served as the general manager of Chase Thailand, Sinapore and Malaysia when Jim Bish served as regional executive for South East Asia in the 1970s. The following is from a eulogy Taylor gave at Bish's memorial service:

Thailand, October 14, 1973: Protesting the military dictatorship of Thanom Kittikachorn, over 200,000 students had gathered around the democracy monument in Bangkok when the Army opened fire, killing 11 students. Open rebellion ensued, the police disappeared and the streets emptied. In sympathy, over 300 Chase staff left their desks to protest foreign support of the regime. Others joined the fray, surrounding the bank, angry, shouting, ranting. Some were armed as well. I was totally alone inside, with a handful of frightened Thai officers and young expatriates.
Knowing that I was alone, Jim was on the phone continuously for two days, calming me, reassuring me, advising me on the response, albeit far awy in Hong Kong.
When it was all over, and things under control again, it was abundantly clear what Jim had done that day. I have never forgotten it. Jim had not only truly, deeply cared about me and my safety and welfare, but also about that of the staff. After all, we were all family, his family.

Saigon. April 29 & 30, 1975: When it became clear that America’s fateful adventure in Viet Nam was coming to an unhappy end, and that the staff of Chase’s Branch and Military Banking facilities would surely face retribution under a North Vietnamese, Viet Cong regime, Jim acted.
Notwithstanding that our Ambassador, Graham Martin, had forbidden Chase to evacuate our staff, Jim mobilized a Northwest 747 and as many staff and their families as could be found, and flew them out of chaotic Ton Sin Nhat Airbase to freedom, as those memorable pictures of the last helicopters hovering above the Embassy, and the Vietnamese outside the compound clamoring to get in were emblazoned on every TV screen worldwide.
Every staff member was given a job for life at Chase in New York.
Nineteen years later, when the Vietnamese staff learned that I was retiring to join the Asian Development Bank, and that among the countries I would be responsible for was Vietnam, they invited me to join them all – every single one – for coffee one afternoon at the bank.
It was intensely emotional. The staffers remembered that awful day with me, asked that I help their country while at ADB and remembered Jim Bish, their hero, for all he had done for them.
Jim cared not only about his staff, the Chase family, but he also felt a deep sense of responsibility, and had the courage, the guts, if you will, to do the right thing when it mattered, no matter what.

Hank Greenberg and AIG, 1976: In the early 1970s, Chase formed a joint venture with AIG in the Philippines, but things did not go well, and as a result, Jim was required to negotiate a resolution of the issues with AIG’s chairman and CEO Hank Greenberg. While none of us knew what in fact had actually happened in that process, we all knew it hadn’t been easy, for either Hank or Jim.
Flash forward to 1989.
While in a one-on-one meeting with Hank Greenberg to discuss a business venture together, Hank suddenly paused, looked me directly in the eye and asked out of the blue, “Did you work for Jim Bish in Asia in the 1970s?”
When I answered, “Yes, why?”, Hank made crystal clear, in no uncertain terms shall we say, “what he and AIG thought of Jim Bish” as a result of those negotiations.

Anyone wishing to share a tribute or remembrance should send it to news@chasealum.org. (We lost some contributions in a computer mishap. If you don't see your offering here, our apologies; please re-send it to the address above.)

From David Factor: I write this note on behalf of Kanchan (nee Arora) and myself, and a couple of our fond memories of dealing with Jim Bish, who Kanchan always remembers fondly from her earliest days with Chase.
Kanchan was probably one of the first local staff members hired for the old South East Asia regional office which started life in the old AIA Building on Stubbs Rd., in Hong Kong. For those who do not remember, Chase sublet part of the office space of American Optical, for whom Kanchan was the receptionist, and it was following Jim’s first viewing of that space that the offer of employment came for Kanchan to become receptionist for the new Chase office.
Jim figured once again on the Friday prior to the Labour Day weekend in 1981, when I was called to his office (in his capacity as Head of Asia). After asking after Kanchan and the kids, he asked what Kanchan was up to that day, to which I replied buying snow suits for the kids, to which he responded, tell her to switch the order to swimsuits, as you are off to Bangkok, how soon can you be there? My retort was, “yesterday”.
For many of us who worked in the Asia Banking Group in the 1970s and 80’s, there were several executives whose presence and influence helped mould a generation of young and aspiring Chase officers, and Jim Bish was notable among them. He will be greatly missed.
Our deepest sympathies go out to Elizabeth and her family at this very sad time.

From Clemens Graf von Wedel: Elizabeth, Ali and I are in our thoughts with you. We often remember the lovely time and adventures we shared with Jim and you in Africa. We were successful in business and had in addition a lot of fun. Last but not least was Jim responsible for my appointment to Africa and the most challenging and most interesting period of my career. I have many reasons to be thankful to Jim, and we still today talk often of him and you, when we flip through our Photoalbums. Jim was a considerate and very human boss, whose passing away Ali and I mourn deeply.

From Roger Griffin: My best memory of Jim Bish was in roughly the same period as mine of Henk Velders, again in my capacity as John Linker’s financial controller but this time with responsibility for the budget and my first time of doing one. Apart from making an appalling hash of the presentation, my principle memory is that we conducted the discussion in Puerto Vallerta which was enormous fun but on the principle that it was between Hong Kong and New York – which looking a map as I write is a bit of a stretch – and that it caused something of a diplomatic fight with the Latin America division. I guess they were pretty territorial then. Anyhow somehow the budget was accepted. Jim was a Prince in my view and always someone who dealt fairly and sympathetically with anyone who was working or had worked for him. He and Elisabeth were a delightful couple and my sympathies are with Elisabeth and their children.

From Tony Lord: I had the pleasure of working directly for Jim, first as his right hand on the Credit and Marketing side when he opened the first Chase Regional Headquarters in Hongkong in 1971, and then shortly thereafter as the first Philippine Country Manager, and initial President of Philippine American Investments Corporation.
Jim was a very special person, and an outstanding mentor, "boss" and friend. One of his very special talents was his understanding of, and fierce loyalty to, the people who worked for him around the Region. And those of us who were fortunate enough to work for Jim also gained a great deal of respect for Jim's inate understanding of the business, and his willingness to make decisions, even in tough circumstances, in one of the most fascinating and challenging business/political environments anywhere in the world.
Elisabeth, Jim's lovely partner in life, was an integral part of the Chase team. The two of them brought energy, drive and fun to the Chase business in the region. They were a great team in every way, and my sincere condolences go to dear Elisabeth, and to Jim's children.