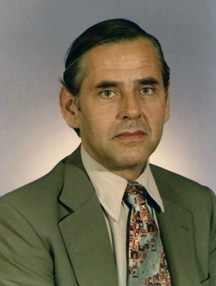 This is an "In Memoriam" for someone who died 30 years ago, prompted by a note from his nephew, Peter Schoustra.

Henk Velders was serving as Beirut Branch Manager for Chase when he was killed by a bomb that exploded in his apartment during the "Siege of Beirut" in June 1982.

Schoustra wrote us, "My Uncle Henk was my sample of success. I only met him when he was on leave/holiday from work at the Chase Manhattan Bank and was staying with my granny during the 60s and 70s, once a year or so. He was always going nice places and that's what I wanted when I started to study in 1974.... I can remember he was always listening to Radio BBC news at my grannny's, and she had a good radio for that reason. He bought my granny her first color tv, which was in 1968 when the Olympics in Mexico were on. ...I remember I got a cube light from Henk when I was a student – the sort of light you had never seen before. In my granny's house he had a wooden chest where his stuff was kept, but we never had a peek at what was in it. My granny adored him. He was never married and died age 49 when his appartment in Beirut was blown away by a planted bomb."

Bill Flanz wrote in his remembrance of Peter Nice, "The Middle East was filled with problems and opportunities for Chase during the second half of the 70s. We had the two "oil shocks", as the Japanese called them at the time, which created enormous financial dislocations. We had to cope with the consequences of the displacement of the Shah by Khomeini, the civil war in Lebanon, and fires (twice) that burned our branch in Bahrain (above which was Peter's office). We received bullet holes in the art work in our Beirut Branch, from which we learned that it is not always a good idea to locate art opposite a window. Not only can paintings be faded by sunlight, but other undesirable things may enter the window. Much worse, our Beirut Branch Manager, Henk Velders, was eventually killed when his apartment building was bombed."

Three co-workers have responded to our request for remembrances; anyone else wishing to contribute something should write to news@chasealum.org.

From Fawzi Malouf: My contribution to the story of Henk’s death is only as it was related to me. In 1982, during the Israeli bombardment of Beirut, I was still a member of the Beirut staff, although I was assigned to New York. I knew everybody who was still in the branch and had met Henk, who, as manager of Chase Beirut,had oversight over human resources in Beirut and was thus responsible for my Lebanese pension administration.
Henk, who lived alone in Beirut, had offered to take in Ali, one of the Chase Beirut General Services staff. Ali was someone who at that time was called an “office boy” in the branch and had seen his home damaged in the events. He and his wife and children had moved to Henk’s apartment, which was in a high rise in what was then considered the safest area in Beirut, quite near the American University of Beirut campus.  On that particular day, Henk was sitting at the dining table with Ali and his family when the phone rang in an adjacent room. Henk got up to take the call from Chase Middle East Area in London. The bomb struck the apartment building just at that time and sheared off half the structure from top to bottom. For Chase London, the line immediately went dead and indeed everyone who was on that side of the building from which Henk was phoning was killed in the collapsing floors. Ali and his family remained unharmed in the dining room.
In the days when I left Beirut in the 1970s, the branch had around 125 employees. I am told that Henk was the only Chase casualty during the 17 years of troubles in Lebanon.

From Roger Griffin: I remember Henk Velders from when he worked in Indonesia for Adrian Noe, another old Handelsbank hand. This must, I think, have been when John Linker in Hong Kong was running South East Asia (which by some feat of geography included Australasia in those days) and I was his financial controller, though possibly Richard Higgerson had already taken over Asia Pacific. Henk was point on the possible acquisition of a one-branch Indonesian bank called  Bank Perniagaan – I was there from HQ, in the old phrase, to help him. Henk was a real banker as was necessary to be able to operate effectively in Indonesia in the ‘70s while I was 7th floor ICMP and London-trained but otherwise useless in that environment. Henk was a trove of information on what to look for in this bank and very patient with me. However the thing I remember above all else about him was his telling me about the bank's vital records policy – I didn’t know there was such a thing – which was to wrap the records in enough thick paper that it would take the bugs seven years to eat through. I liked Henk. He was a good and patient man. Coincidentally, I came across Bank Perniagaan in a post-Chase life in Jakarta in the ‘90s, and it had survived without being acquired by Chase and in spite of its vital records policy or lack of one.

John Nuzum: Henk was a member of the 25th Special Development Program in 1965, having joined Chase with the acquisition of several branches in Asia a couple of years earlier. He was quiet, smart and funny and proved to be a good friend, who, at the time of the SDP, knew a lot more about banking than most of us. Like most of his Dutch colleagues who joined at the same time, he was willing to accept an assignment almost anywhere. I am sure that he had no second thoughts about going into war-torn Beirut, but those of us who knew him were devastated by his death. I am very glad that the Association has been prompted to post a memorial. I remember him fondly and miss him.

John O'Mulloy (3/11/21): I have only just found your memorial for Henk and his nephew Peter's request for more information on what occurred. After the London credit course, my first role was in Beirut, Baghdad and Damascus. I should explain, this was not only because I came out at the bottom of the credit course, which I did....but because I claimed to have some academic background on the Middle East!      In a short time, I spent many weeks in Beirut during which Henk, for a youngster like me, became a total role model. We won the first DDA account from a Lebanese bank, had dinner in some of the most dangerous restaurants in the city.......etc. I also was close to Eli, George, and Sami our driver, whose advice on where to cross the Green Line every day was crucial.      Henk made me leave shortly before what happened. I was in our London team when the news was received,and attended his funeral. If Peter would like more stories from the time I spent with Henk, I would be honoured to write to him. I am sorry I had not seen this for so long.