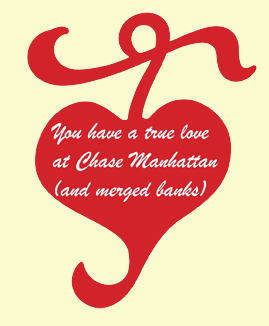 How I Found True Love at Chase

We invited couples who met at Chase (or one of the merged banks) to share their stories about how they found true love at the bank. We encourage you to add your story, by writing to news@chasealum.org. Happy Valentine's Day!

♥ From Phil DeFord: Shelley Cosgrove and I both started in the Chase Training Program toward the end of 1974. After a number of years, even though we were friends the whole time, Shelley and I started to go out in about 1981. Toward the middle of 1982, I was offered the opportunity to move out of the aerospace division at Chase in New York to go to Indonesia to run Corporate Banking at Chase Indonesia. Shelley was in the Corporate Bank at that time also. We talked about the opportunity and decided to get married and head off to Asia. Shelley and I got married in September of 1982 and five days later headed to Jakarta for what turned out to be a 25-year honeymoon in Asia.
I spent five years with Chase in Indonesia and Thailand and then spent a couple of years with Chemical in Hong Kong as the MD of Chemical Asia Ltd.
About four years ago, Shelley and I moved back to the States where we are now living in St. Louis. I’m an executive recruiter with DHR International and Shelley is involved with a number of Boards. We have two daughters who both grew up in Asia. One is working for Current TV in San Francisco and the other is teaching for Teach for America in Blytheville, Arkansas.
If it hadn’t been for meeting in the Chase Credit Training Program, this tale would have never happened, and we’ve had a lot of great Chase friends along the way.

♥ From Polly Daly: I (known as both Mary and "Polly" Wall) started in CC8 of the Global Credit Training program at Chase following my graduation from Brown University in 1973. Another Brown classmate and friend, Bob Daly, started in CC11 that year. We both departed in 1976 to attend Harvard Business School, but while still at Chase we started dating and continued for a while thereafter. After business school, Bob and I went our separate ways, each married and had children. Our paths crossed only a couple of times at subsequent school reunions, and we lost touch entirely. Seemingly out of the blue, I received an e-mail more than 30 years later from Bob simply stating that he was trying to get in touch with old friends and wondering how I was. At the time I had been a divorced single mom for 15 years, living in Westchester while continuing my banking career in Manhattan. Bob was a recent widower, retired venture capitalist, pursuing medical research and living in the Boston area. Before long, we agreed to marry, which we did in April of 2007, and we now live happily in Providence, RI. It is great to have that old shared history, much of it from Chase.

♥ From Vicki (Anderson) Entreken: David and I met while working at Chase Card Services (CCS) in Tampa, Florida. I reported to a meeting in Kevin Reilly’s office where David also attended for a black belt project call out of San Antonio. But it wasn’t until a couple of years later that, thanks to a staff reorganization, he found his quiet lunch space in the second-floor break room taken over by a new group of quality assurance and process improvement analysts. We started eating lunch together. Then we found ourselves stepping outside for a breath of fresh air and idle chatter in the courtyard. He invited me to a Tampa Bay Devil Rays game in June, 2004. But it was still only May, and I think we were a little too excited to wait, so we took a half day off from work and rode roller coasters for the rest of the afternoon at Busch Gardens.
Our friendship outlasted our jobs as the Bank One merger forced the closure of the CCS call center in Fountain Square. We moved on to Treasury and Securities Services (TSS) and met more amazing people. At our wedding reception, besides family, we had a large table of CCS friends and a large table of TSS friends. All wonderful people that we still keep in touch with. David still works in TSS and I’m about to graduate from the University of South Florida and launch a consulting business in both technical writing for small business and creative writing/editing for consumers. It is now eight years later and we still disagree about whether the Busch Gardens trip or the baseball game was our first official date. I say it was the roller coasters.

♥ From Wade Bell: The former Carole Palka and I met in August 1977, at a little celebration for Ernie Gustafson, who was being honored for his 40th anniversary with Chase. We were in different divisions within the Domestic Institutional Department. I told her that I had been dying to meet her (true), and we agreed to get together after work to have a drink and get to know each other. Fate intervened, however; that day, the Puerto Rican nationalist movement FALN threatened to bomb various building in NYC, including 1 CMP. While our building was not bombed, it was evacuated at midday, and our first date got postponed by several months, due to travel schedules and other factors. However, when it did happen, sparks flew; several months later, we became a couple, and I am proud and happy to say that she has been Carole Bell for almost 34 years. We are now enjoying retirement in Sedona, AZ and are still completely in love with each other and with life!

♥  From Nancy J. Saur: Phil Pace, my husband of almost 25 years, and I met in August 1986 during a Chase training session on Negotiation Skills held at 33 Maiden Lane.  Phil wasn't even scheduled to attend, but someone in his department (CDC) couldn't make the class, so Phil was slotted in (those were the days where your department was charged if you did not attend).  In an interesting twist, this was one of the few Chase training sessions where the instructor dictated the seating plan, and we sat next to one another.
All went well until the last negotiation, or did it? We each had to walk out of that last negotiation with something we wanted - and yes, Phil wanted, and was granted, a date!  When we were married, we hosted a number our CDC and Audit colleagues at Delmonico's and a great time was had by all!
We left Chase in the late '90s and moved to the Cayman Islands, where we continue to live.