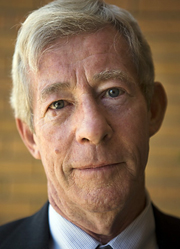 Memorial mass to be held in Hong Kong, Feb. 27th

John's earliest years were spent in Hill City and Faith, South Dakota, where his father was Superintendent of Schools and Coach of the varsity men's teams. In 1953, the family moved to Rapid City. As a high school senior, John led his high school debate team to its first ever national championship at the National Forensic Leagues' meet held that year in Pittsburgh.

John then attended George Washington University in Washington, D.C., where he studied political science and worked part time on the Hill for Senator Karl E. Mundt and Representative E.Y. Berry. Transferring to Yale University after his freshman year, John graduated cum laude in 1965 with a degree in Political Science. At Yale, John was captain of the debate team and winner of the prestigious DeForest Prize "For the senior who shall write and pronounce an English Oration in the best manner." Following Yale, in 1968 he earned a law degree from the University of Pennsylvania. While in Philadelphia he met his wife, Monika Wood Quinn.

After receiving his law degree, John secured a position with Morgan Guaranty Trust Company in New York City as a security analyst specializing in the food industry.

John was a lifelong learner, continuing his education in New York City, earning a Master’s Degree and a Doctorate in Corporation Law from New York University. Employments following Morgan Guaranty in a long business career include Merrill Lynch, Nomura Securities, Irving Trust, Chase Manhattan Bank and Wardley Investment Management, as well as a career turn from investment analysis to investment management throughout the Far East.

John's job often required that he make lengthy business trips to Asia. Offered an opportunity by Chase Manhattan Bank to live in Hong Kong, John and his family spent five wonderful years there. The family moved to Tokyo, Japan in 1988, where they spent two years enjoying the culture of Japan. In 1990, John received a position to head the Investment Division at Wardley, a British investment firm that had offices in Singapore. John and his family spent several more years there before returning to New York City in the early 1990s.

In New York, John was CEO of the investment firm, Marinvest Inc. John and family returned home to Rapid City in the mid 1990s. In Rapid City, John pursued an academic career, teaching economics and marketing at local universities and colleges, and heading National American University's Rapid City campus. Continuing his own education, he recently earned his sixth degree, a Master’s degree in History from the University of South Dakota. He also began writing books about American culture, politics and business, including 'American Zenith', the Fabulous 50s, published in 2007.

John was very active in the community. He wrote a business column in the Rapid City Journal for several years and was a frequent lecturer on contemporary economic and political issues, as well as a regular commentator on local television stations.

John believed life should be led to the fullest every day. While in Asia, John often surprised his family with travel plans to "exotic" and non-traditional locations, including Vietnam, the former Soviet Union, Sri Lanka, etc. His love of travel continued all his life. In recent years, John and family travelled to Iceland, Hungary, Suriname, Bulgaria and Romania. While traveling, John spoke to local American Chambers of Commerce and universities about global investment strategies. He was currently planning trips to Asia and, later this year, a trip to Peru.

John is survived by his wife, Monika, his two sons, John and William, his daughter-in-law, Marissa, his grandchildren, Amelia and Wilson, his brother, Jim, and many other loving cousins and relatives.

A memorial has been established for Westminster Presbyterian Church in Rapid City, SD.

Colleagues and friends who would like to leave a remembrance or tribute should send it to news@chasealum.org.