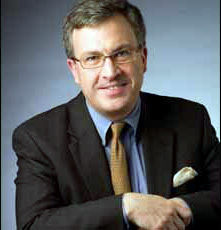 Passing on the "Soldatos Imperative" to His Son

Walter Simson left Chase in 1989 after two stints – one in Credit Audit and Syndications and another in the middle market. He left in between to turn around a family printing company. He was determined to do turnarounds, and his first assignment was the Freeman Shoe Company in Beloit, WI. "I had never been to Wisconsin before, but it was a fateful move," he recalls.

Many years later, he came to Madison to take over a biotech company, his third stint as a life sciences CEO.  (The other two had been in Boston.)  The company in Madison had previously obscure technology that fascinated him – stem cells and nuclear-transfer cloning. In the middle of this turnaround the technology became a popular sensation – an unwelcome development from his point of view.

He started Ventor Consulting in 2004 to assist middle-market companies.  (The interim management aspect of his work was actually mentioned recently in The Huffington Post.

He now lives with his wife, Val, in Chatham, NJ, and commutes to his office in Madison, WI.  "I find the midwest is a hotbed of middle market activity of all types and I really enjoy the people," he said.

He has three sons: Walter (Chip), finishing a four-year engineering degree in Munich; Will, at the University of Wisconsin, and Teddy, at Chatham High School.

The following was one of his recent "Mad @ Mgmt" blogs for ibmadison.com:

The other day I met my son Will for a burger in Madison. Where to go but the Nitty Gritty, the bar and grill famous for its free birthday drinks (and for its longtime owner and chief greeter, Marsh Shapiro, who died late last year)? I arrived first, ordered a diet drink, and found that Will was still a few minutes away. So I hatched a plan that depended on a quick consultation with a conspirator.

Will arrived to find my diet drink had a balloon tied to it, and my name was on the greeter board.

(This is the board that the bartenders normally use to proclaim a lucky child’s entree into the adult world. I had arranged for a five-minute interval of youth.)

Will looks at the balloon, the board, and me. “What’s going on?” he asks. It’s a question I anticipated, and I gave the only possible answer.

“Hey, you are not the only one with a fake ID.”

(I hasten to add that I'm not saying that my son has a fake ID – this is meant more as an intergenerational joke than a report on facts!)

Joke over, the bartender erased my name and took away my lovely balloon.

We then had a father-son chat. Will is interested in business and has joined the Finance and Investment Society. He is also hearing good things about the Investment Banking Club. So we talked about investment banking. The skills needed, what assignments look like, the value to society. How to value companies and what’s a discount rate.

Then Will looked at his watch and remembered he had a calc exam the next morning. Too bad. I was about to launch into the Soldatos Imperative.

Paul Soldatos is a London-based investor. Turns out he too was a Wisconsin undergrad. And some years after that, he found himself as a second vice president and team leader in the credit training program of the Chase Manhattan Bank. I was one of his trainees.

It was a wonderful, challenging experience for a young liberal arts major going to Wall Street at 21. I couldn’t spell finance, did not know how to use a calculator, and had the maturity of a 14-year-old. These all, it turned out, were powerful headwinds in a serious program that was designed to marinate your brain in a lot of financial analysis techniques for a year, then test you in increasingly difficult one-on-one encounters. These weeklong analyses were the pits.

I mean literally. The preliminary exams were called “desks” because you could meet at the examiner’s desk and he or she could grill you, without a break, for a whole day.

The final exams were open to the public and were called the “pits.” (Lore tells us they were named this after the deep well of the auditorium in the old Chase building at 20 Pine St. in New York. That is where the finals were held.)

Paul Soldatos was known as a taskmaster, a rough and tumble guy in an elegant suit, someone who did not necessarily hew to the most polite form of questioning. In a corporate culture that celebrated the deep and public examination of financial decisions, Soldatos was celebrated as a deep thinker and an equally deep questioner.

So here I come, a French literature major who was still learning to shave and tie a tie. I was sure Soldatos would chew me twice and spit me out.

Instead, he was a perfect gentleman. My errors he brought out quickly and without fanfare. He passed me on the case. Then he gave some advice.

“I want you,” he said, “to read the credit markets column of The Wall Street Journal every day.” That was it. Simple.

And I have done that pretty much every day since.

Soldatos knew that I did not know much about the U.S. Treasury market when he made the recommendation. That was the point. Learning about the financial world through a daily struggle with the complicated and ever-changing interplay of interest rates, economic growth, and politics give you a feel for each, along with a well-earned sense of humility about what you don’t know.

And this is what I recommend to my kids when they come of age. (It’s amazing the kind of positive parent-child interaction that comes from discussing a complicated issue with common background information, by the way.)

A belated shout-out to you, Paul, for the advice. And Will, next time we have a burger, we need to finish that talk.