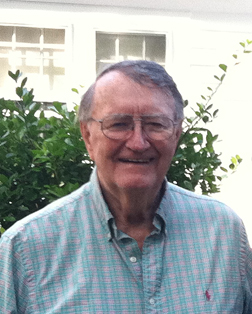 36 Years at Chase, from Hong Kong to the Americas
Memorial Service in Connecticut To Be Held June 9, 2013

The CAA mourns the passing of its member Don Porter, 90, who passed away peacefully on March 18, 2013 in Deltona, Fla, where he spent the winter.

A native of Cedar Falls, IA, he served as a B-24 pilot in World War II, flying 32 missions over Germany.

After the war, Don met his wife, Margaret, at the University of Northern Iowa. They married in Hong Kong in 1949, where Porter worked for Chase Manhattan Bank, having joined the Bank in 1948. After Hong Kong, they raised three children while Porter managed branches in Panama and Trinidad, and established branches in Trinidad, Guyana, Barbados, Grenada and Monserrat. He was also a Chase Area Representative and Institutional Manager stationed in Argentina and Venezuela.

In 1984 the Porters retired to Old Lyme, CT. Don was a natural storyteller, painter, ready singer and great debater. He was active in the First Congregational Church of Old Lyme and the Democratic Party.

Mrs. Porter died in September 2009. Mr. Porter is survived by their three children and seven grandchildren, as well as his brother.

A memorial service will be held at the First Congregational Church of Old Lyme, CT, on Sunday, June 9, 2013, at 2 pm.

In lieu of flowers, donations may be made to the Don and Peg Porter Memorial Fund at the First Congregational Church
of Old Lyme.

Anyone wishing to share a tribute to or remembrance of Don Porter should send it to news@chasealum.org.