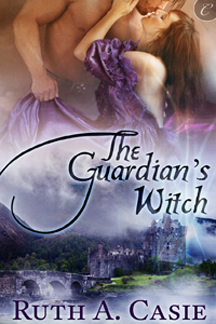 Ruth Seitelman had a 25-year corporate career, including long stints at Chemical and Chase.

For the last nine years she has been involved in – and currently serves as president of – Shelter Our Sisters (SOS), the only emergency shelter for victims of domestic violence in Bergen County, NJ.

And, under the pen name of Ruth A. Casie, she’s a romance novelist – specifically historic fantasy novels published by Carina Press, the digital first imprint for Harlequin. Her first book, Knight of Runes, was published November 2011. Her second book, The Guardian's Witch, releases on July 1, 2013, and the publisher has already asked for more.

Lord Alex Stelton can’t resist a challenge, especially one with a prize like this: protect a castle on the Scottish border for a year, and it’s his. Desperate for land of his own, he’ll do anything to win the estate—even enter a proxy marriage to Lady Lisbeth Reynolds, the rumored witch who lives there.

Feared and scorned for her second sight, Lisbeth swore she’d never marry, but she is drawn to the handsome, confident Alex. She sees great love with him but fears what he would think of her gift and her visions of a traitor in their midst.

Despite his own vow never to fall in love, Alex can’t get the alluring Lisbeth out of his mind and is driven to protect her when attacks begin on the border. But as her visions of danger intensify, Lisbeth knows it is she who must protect him. Realizing they’ll secure their future only by facing the threat together, she must choose between keeping her magic a secret and losing the man she loves.

A Brooklyn native, Seitelman's background was a bit more sober than her more recent prose: She was a trained as a speech pathologist and audiologist and briefly taught drama, working in schools for eight years, in New York City and Union City, NJ.  She left teaching to have two daughters. After an early divorce, she needed to get back to work.

She found a job in the Chase training group in 1993 and became a teller trainer. "If you’re a good teacher, you can teach anything," she said. "Even when you become an executive – presentations are all teaching experiences."

When she had an international job at Bankers Trust, she did an awful lot of traveling. "I filled up my passport in two years of travel. Our mandate back then was that if you’re going to go overseas, it had to be at least a two-week trip. I’d usually fly over alone and meet people in offices abroad. Again, I saw it as a teaching opportunity. Our clients were other banks, and I taught them about new regulations."

By this time she had remarried and had a younger child of three. Her older daughters were 11 and 15.

"It was easier to pass time traveling if I was reading. I would travel with five or six books and wanted fast reads and disposable books. Romance books fit the bill. Romance books of that day were a quick read, though my true love is more the adventure story," she said. "Some were better than others. I wasn't into erotica – more into the 'Knight in Shining Armor'-type of guy.

"And I was going to places where I could imagine what the stories were like. Visiting castles in England, say, some of the stories came to life," she recalled.

Seitelman had never thought of writing romances herself, though in her mind she would often change the ending or consider a follow-up to a book she'd read.

The door to writing actually opened through her volunteer involvement with SOS, where the policy is to have a former client on the board. A few years ago, said Seitelman, that board member was "Denise, a smart woman who got into a bad relationship – a Columbia graduate with a degree in physics who told me she was writing a romance novel." They agreed to work together to frame a story line.

"Denise stopped writing, went on to run a New York Marathon and find a school for her daughter, and I went on to write a novel," Seitelman said.

"Writing is an outlet for creativity," she said, noting that one isn't necessarily rewarded for creative writing at a bank, where there are stringent guidelines. Indeed, when she began writing, she was sure to tell her boss. "I wanted to make sure someone knew and I was not blindsiding someone."

Now, she said, "I can write anything I want, kill off anyone I want. I have the responsibility of ownership, responsibility of creating something good. I use my voice for principals I believe in. It's very cathartic in many ways."

"I spent another year learning what a good story was and editing the story," she said. She became active in Romance Writers of America, particularly in the New York and New Jersey chapters, took online courses and had help from published authors.

She presented Knight of Runes to Carina in October 2010 and had an offer by February 2011. Her husband, Paul, an IT analyst (who would deny having posed for the cover), asked her what name was she going to publish under, and she said she assumed "Ruth Seitelman." "Paul asked, 'What do you want to use Seitelman for?' and all the bad spellings of the name came to mind. My maiden name was Breus, but no one gets that right either.

My kids came up with the answer – "A" is for my youngest, Ari, and Casie is for my daughters Cori and Staci."

Back in the 1980s, she said, romance novels featured more damsels in distress. "Now you have a more self-sufficient woman. I think of my characters as 'capable women and the men who might deserve them'."

In her first novel, Knight of Runes, her lead heroine is a time traveler. "Anything Rebeka does, she does well. She travels back in time 400 years and takes up martial arts because of the mind-body connection." 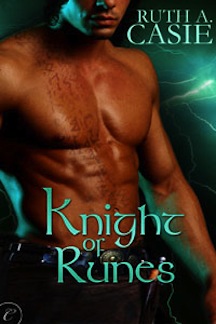 When Lord Arik, a druid knight, finds Rebeka Tyler wandering his lands without protection, he swears to keep her safe. But Rebeka can take care of herself. When Arik sees her clash with a group of attackers using a strange fighting style, he’s intrigued.

Rebeka is no ordinary seventeenth-century woman—she’s travelled back from the year 2011, and she desperately wants to return home. She poses as a scholar sent by the king to find out what’s killing Arik’s land. But as she works to decode the ancient runes that are the key to solving this mystery and sending her home, she finds herself drawn to the charismatic and powerful Arik.

As Arik and Rebeka fall in love, someone in Arik’s household schemes to keep them apart and a dark druid with a grudge prepares his revenge. To defeat him, Arik and Rebeka must combine their skills. Soon Rebeka will have to decide whether to return to the future or trust Arik with the secret of her time travel and her heart.

The book sold well for a first-time author, became an audiobook and will be printed by Harlequin. She was on to book number two. She continued writing at night until she left Chase, on May 31, 2013: Her job had been eliminated.

Seitelman had already gone from Treasury Services into procedure writing in Auto Finance ("In April the government changed regulations again and everything we'd written got tossed out," she said.). She was put into the talent reassignment pool and says there were certainly jobs she could have found in the bank, "but the thought of not working and being able to devote time to writing became a very great drive."

She doesn't have much time on her hands, though. Besides writiing, she's chairing a conference for the NJ chapter of Romance Writers of America in October.

She's also been very busy in her second year as president of SOS, having already served as secretary for two years and vice president for five.

"Nine years ago, Paul signed us up for ballroom dancing. One of the other couples was involved in the organization and recruited me to the board to rebrand SOS," she explained.

She's mandated to leave the board when she finishes this term, but she's led the organization to acquire 5,000 square feet of space in Rochelle Park, NJ, and begin a major capital campaign as part of a five-year plan she helped develop.

Besides assisting women and their children in crisis, SOS reaches out to the community, providing  counseling for women to help them reach self-sufficiency. SOS administers transitional housing for clients when they are ready to leave the emergency shelter. One of its lead programs is Project C.H.I.L.D., an afterschool art and music therapy program for children touched by domestic violence. Government-funded, the program is seen as a model for others. With very limited space and the need to expand, SOS is in the process of buying a new building that will house Project C.H.I.L.D. as well as Project Self-Sufficiency and SOS's administrative offices.

"Three out of five women will be a victim," Seitelman said. "Domestic abuse is a continuum, beginning with verbal abuse, ending with physical attack."

Through both SOS and her novels, she's proving that women can look out for themselves.