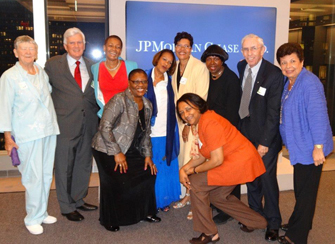 More than 100 alumni of the Chase Bronx/Westchester/Mid-Hudson branch division (and some of their supporting headquarters staff) met for a reunion on the 50th floor of JPMorgan Chase’s headquarters at 270 Park Avenue on June 11, 2013.

The evening started with a cocktail party. Helen Durkin, who was one of the evening’s organizers, welcomed the guests and particularly thanked Ed Sheeran for getting the 50th floor venue. Helen then introduced Ken Jablon, who was the Division Executive in the early 1980s and is a current CAA Board member. Ken spoke about the importance of branch personnel who were on-the-line with the customer every day.

Ken presented the “Chase Banker of the Century Diamond” award to Jamie Dimon, Chairman and CEO of JPMorgan Chase (JPMC). The award read: "Presented to Jamie Dimon for His Brilliant Leadership of the Bank, by 100 Chase Retirees Representing over 3,000 Years of Service to a Great Bank."

Accepting for Jamie was John Donnelly, Human Resources Executive for JPMC. John thanked the alumni for coming and for their support of the bank. Earlier Ken had thanked Jamie and John for their support of alumni, no matter which bank they came from that eventually became JPMC.

A buffet dinner followed during which there was a performance, “The Magical World of Comedy", by an excellent magician/comic, Charles Hayden. His act included quite a bit of audience participation.

At the end of the evening, the alumni enjoyed the nighttime views of midtown Manhattan.

Click here to see the whole photo album on Skydrive. We hope to get more photos from other attendees, which we will add to the online photo album as we get them. All attendees will be notified when the photos are available.