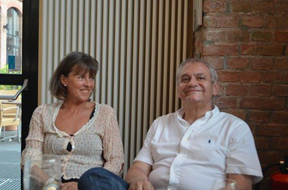 President Obama wasn't the only one to shed his jacket in Germany on June 19, 2013.

Writes Birgit Wilde, assistant to CAA Frankfurt coordinator Rolf Stokburger: "We had our summer meeting of the Chase Alumni’s Frankfurt. Sixteen members found their way to the old township Frankfurt Sachsenhausen and enjoyed a meeting in an old cable car depot named ‘Depot 1899’. It was the hottest summer day in June: 36 degrees Celcius* (!) and everybody burned up. So it was realy fantastic, that from 18 declared members at last 16 members attended."