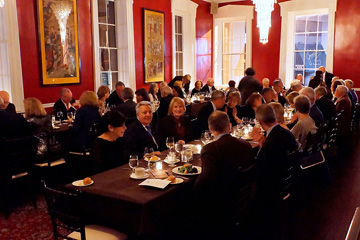 Of the Hudson Valley, Brooklyn and The India House

The latter group included 34 alumni from Germany, the United Kingdom, New York, Connecticut, New Jersey, North Carolina, Georgia and Florida. We got together before the 1 CMP reception for an orientation as well as a wonderful presentation on the JPMC corporate art collection, by the collection’s curator, Tom Behrens.

Our trip was not completely spared the effects of the federal government shutdown. We had originally planned to visit the FDR Home & Library and the Vanderbilt Mansion in Hyde Park – both properties managed by the National Park Service – with lunch at the Val-Kill Tea House, on property formerly owned by Eleanor Roosevelt. By Wednesday morning, tour organizers Ken Jablon and Andrea Axelrod, with the blessing of CAA President John Ward, had to decide whether we could rely on the properties being open by Friday. As the deal eventually struck by Congress on Wednesday night didn’t seem a sure thing, we went with our Plan B: a visit to Storm King Art Center and DIA: Beacon, preceded by a brunch at Annarella’s on the Green in Cornwall, NY.

Well, we still weren’t spared the effects of the shutdown! Although we had a new contract with our bus company confirming our new itinerary, the company sub-contracted the tour, and the subcontractor hadn’t updated the paperwork. We were well past the exit to Storm King when we realized our bus driver was on his way to Hyde Park! Never did the distances between exits on the thruway seem so long…and never were we so happy to have water, apples and snack bars aboard the bus. Our annoyance was lessened when we arrived at Annarella’s (an hour and a half late) and the kindly owner shouted, “The first round of drinks is on me!” The food was great, the views glorious and the drinks, well, mood-changing. The fabulous owner Anna even led us by jeep to Storm King, lest the bus driver get lost again! 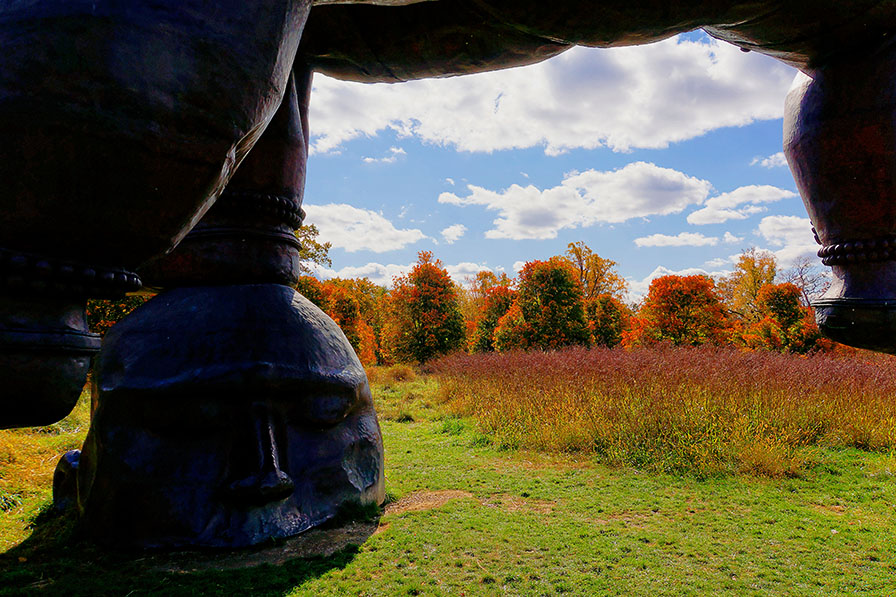 Jean Marc Bara, who had been to Storm King many times, gave as an on-bus orientation and strategies for seeing the large-scale works on the 500-acre property. Fortified with food, drink and Jean Marc’s advice, we entered what is surely one of the great sculpture parks of the world – to be visited and re-visited in all the seasons. Some of us took a tram to see all the major works, others hoofed it. As John Ward said, “This was a home run.”

Our next stop, DIA: Beacon, housed in an old Nabisco printing factory, was more like an infield double: Some of us adored the works that played on light, volume, space, texture and perception, while others thought much of the abstract art a case of the “Emperor’s New Clothes”. DIA doesn't permit photography, so you'll have to visit the museum to decide for yourself!


We then crossed to the west bank of the Hudson for the long ride to our destination restaurant, The Depuy Canal House in High Falls, NY, Ulster County, about 20 minutes from New Paltz. It wouldn’t have been quite so long a ride from Hyde Park, and some of our group despaired that we would ever reach the hamlet, population 627. Once we got there, however, everyone fell under its spell. We were met by Bill Merchant, president of the Delaware & Hudson (D&H) Historical Society and Museum, who gave us a private tour of the museum and told us the history of the D&H and the region. The canal was built to carry anthracite coal from Honesdale, PA to Kingston, NY, from where the coal was put on barges and taken down the Hudson to New York City. 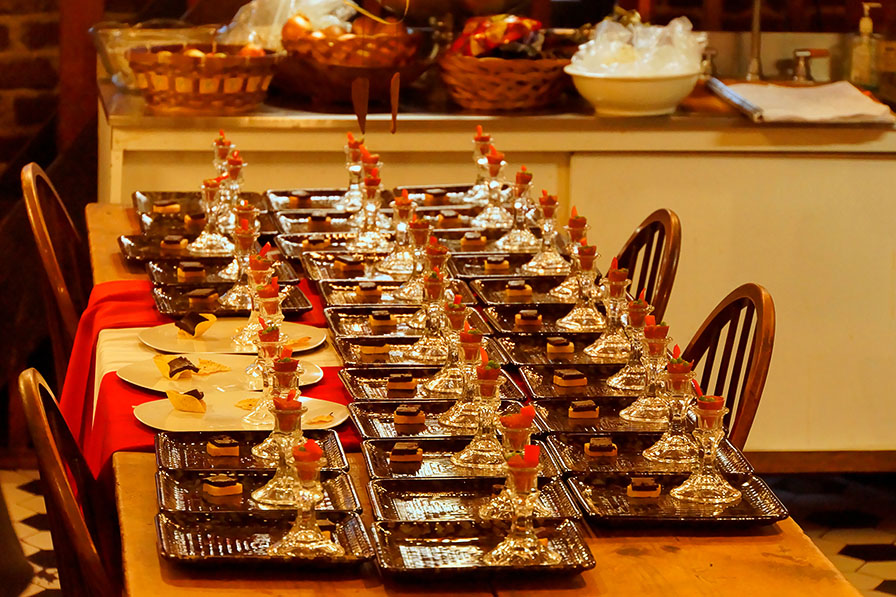 nd then there was dinner…and dinner…and dinner – hors d’oeuvres plus five courses prepared by The Depuy Canal House’s owner and chef, John Novi. The dinner featured locally sourced products and American wines. We were seated in a room on the second floor of the Canal House, which dates to 1798. Hans van den Houten was sitting under a crack in the ceiling, which Novi insisted had been there for at least 12 years, but the more we drank, more expansive did the crack seem!

Sated, we headed back to New York City and our terrific boutique hotel, The Wall Street Inn on South William Street. While we’d expected to be back in the city no later than 10 pm, we arrived close to midnight. 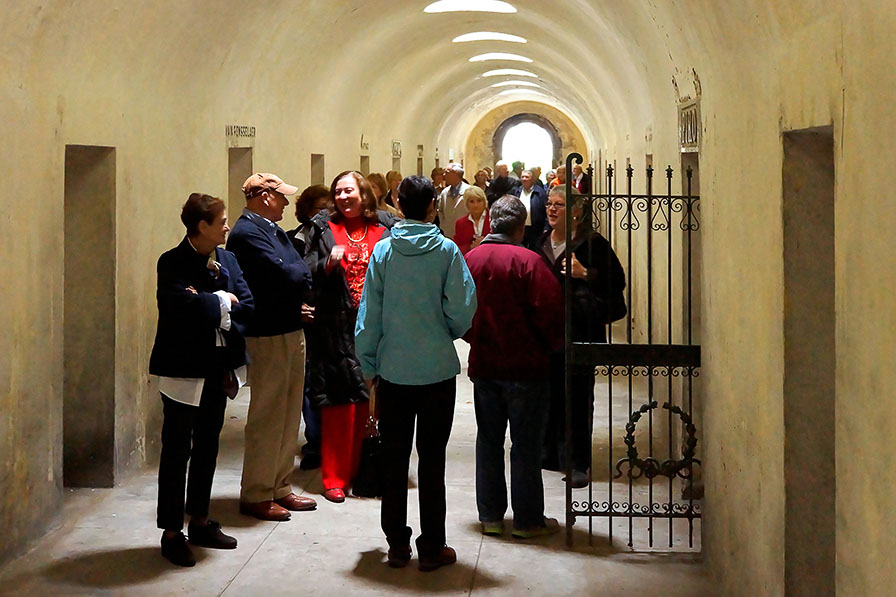 ertheless, everyone was on time for our trip to Brooklyn on Saturday. The morning consisted of a trolley tour of the Green-Wood Cemetery, led by Jeff Richman, the cemetery’s senior historian. This was another home run – a prism through which we learned about 19th century New York history. We saw the graves of DeWitt Clinton, Currier & Ives, Louis Moreau Gottschalk and Leonard Bernstein, among other “permanent residents” of Green-Wood. We visited the site of the Battle of Brooklyn of the American Revolution. Jeff let us into catacombs and told us tales of the families whose mausoleums dot the hillsides.

Then it was off to a picnic lunch (praise the weather gods!) at the Erie Basin behind the Ikea store in Red Hook, Brooklyn. The really wonderful lunches were from Gourmet Guild Williamsburg and packed in customized Chase Alumni Association lunch sacks. Along with lunch came our introduction to Dom Gervasi, who runs a series of tours highlighting local artisans under the rubric “Made in Brooklyn”.

Some of our group took the free Ikea ferry to lower Manhattan because they had other plans for the afternoon. Those who took the tour of Red Hook with Gervasi were greatly rewarded. 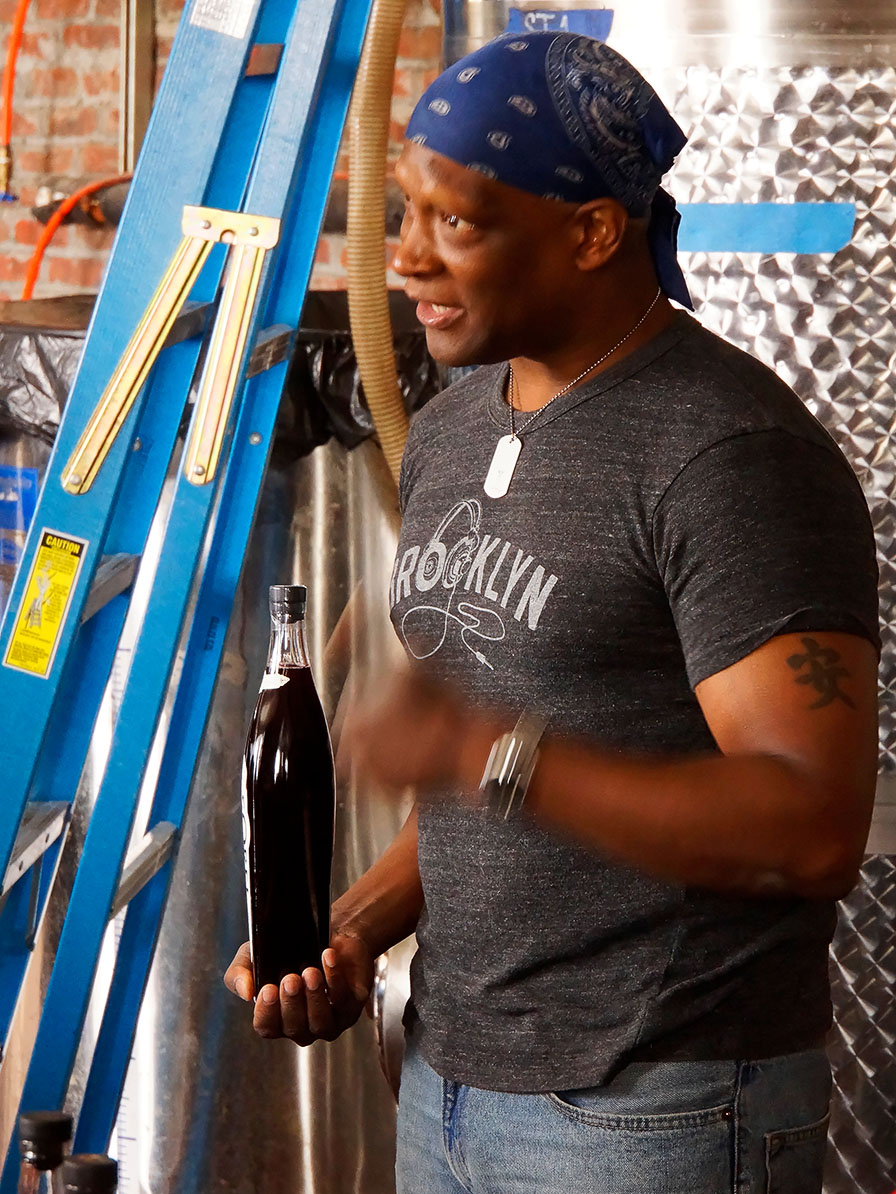 first stop was Jack From Brooklyn. At first we felt as though we were stumbling into our local moonshiner, the kind who has named his stills “Lucy” and “Big Bertha”. The Jack is Jack Summers, who survived a near-fatal illness and decided to leave his corporate job to follow his passion. That passion was a spirit that comes from his native Barbados, based on hibiscus, clove, nutmeg, cinnamon and other spices, with wheat grain alcohol. Jack used to cook up the libation in his kitchen and bring it to parties. He figured out how to make the mixture shelf-stable and went into business, naming the drink Sorel. It’s now sold throughout the country and a favorite of chefs.

Jack was a natural salesman and, let it be said, a natural survivor: He told of how just a year ago water from Hurricane Sandy filled his new factory with four feet of water. Friends and neighbors helped him get back on his feet. He had no insurance and has never had a bank loan. His dream is to expand his product line to include other types of “exotic hooch”.

Once we’d tasted the delicious Sorel (think of cold glühwein), it wasn’t difficult to decide we’d walk to our next stop since it would take us past a liquor store where Sorel was sold. We bought out the supply!

Then it was to Cacao Prieto, the bean-to-bar chocolate maker, with a detour to a pop-up Nat Sherman cigar shop. Cacao Prieto also makes Widow Jane whiskey and novelty rums.

Next stop was Pier 41, a series of renovated warehouses that, like much of Red Hook, has been developed by the O’Connell Organization. We visited with the remarkable Charles Flickinger of Flickinger Glassworks, the area’s remaining glass bender (not blower, but bender). His was also a story of surviving Sandy, again without insurance, with the help of friends, family, clients and online crowdsourcing.

We capped our visit to Pier 41 with a stop at the Red Hook Winery. Yes, Virginia, they do make wine in Brooklyn! (The grapes, though, are from the North Fork of Long Island.) Perhaps the best part of the winery is the view of the Statue of Liberty from its back porch.

Some of the men on our group were uncertain about our next visit, the leather and felt accessories studio of designer Alfred Stadler. But while many of the women were figuring out what to buy, the men were mesmerized by Alfred’s demonstration of leather stitching techniques. 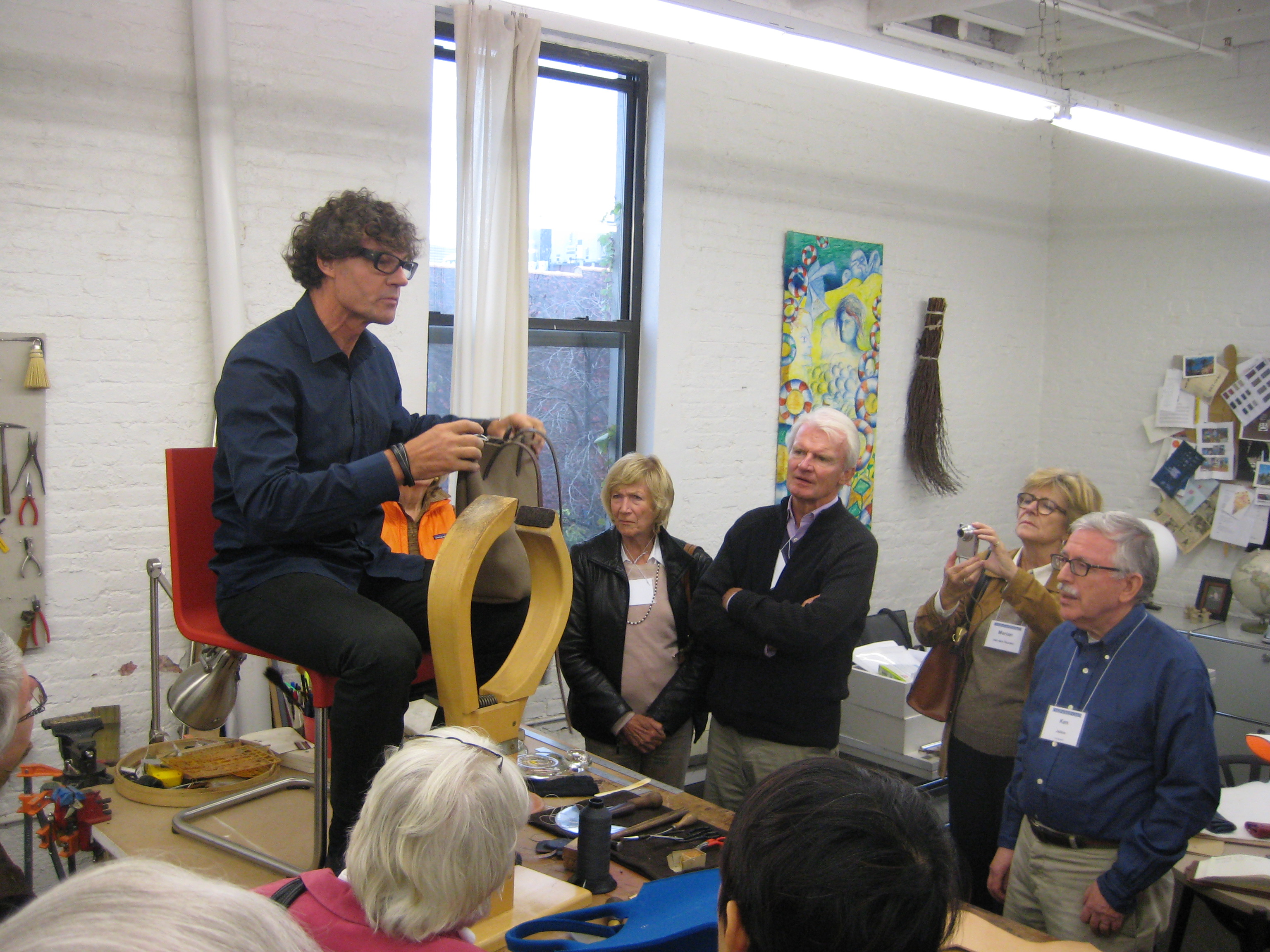 Hook was a Brooklyn neighborhood most of our guests would have never visited. (It is so inaccessible by public transportation that more of its residents get there via the Ikea shuttle than by the MTA!) Several alumni commented on how special it was to experience the entrepreneurial spirit of the artisans we’d visited.

It was back to Manhattan, though, for our final group activity, a grand dinner at The India House, One Hanover Square. Masterpiece Caterers did a first-rate job of producing a dinner that, in the words of Leon Desbrow, rose “above the institutional banquet food that we so often have to endure.” Dinner remarks came from CAA President John Ward and CAA co-founder Hans van den Houten, who, along with Tom Lynch, got the group singing everything from The Whiffenpoof Song to The Band Played On, and inveigled Sieglinde Hartmann and Andrea Axelrod to lead the group in Auld Lang Syne.

And so it is, Auld Lang Syne, till the next CAA reunion!

Here's a link to Hans van den Houten's photo album from the weekend, via Picasa. 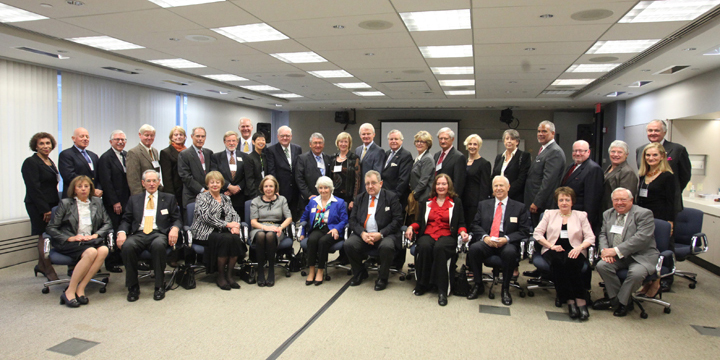