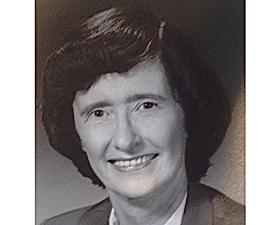 Therese (Terry) M. Molloy, 90, a division executive at Chase Manhattan who was in charge of 65 regional branches, died on December 5, 2013.

Following her retirement, she earned a law degree, at the age of 68, from CUNY Law School, and started a family law practice of Kovit and Molloy with her longtime friend Meryl Kovit.

Mayor Koch named her to the NYC Charter Revision Committee in 1986.

She also served as Chair of the Greater Jamaica Development Corp. and as a Eucharistic Minister.

From Mike Ryan: Terry was the most energetic person I ever met. She was a multi-tasker long before that trait became widespread. Terry started as a clerk in Queens and rose to Division Executive of all 65 Manhattan branches from New York Plaza to Dyckman Street. That group had previously been in four sections each led by a V.P.  I was pleased to be the marketing person for a couple of years. Her drive was contagious and people skills were extraordinary. After "retiring" she graduated  from law school and established a practice in Queens. Rest in Peace, Terry.

From Ken Jablon: Terry Molloy was, if not the first, one of the first couple of female Vice Presidents at the Chase Manhattan Bank, and she was not in a staff job but was in charge of all of the branches in Queens County. Terry reached this position because she was a "driving force."
Terry always made her opinion known and, in my experience, those opinions were mostly correct. I first dealt with Terry when I was heading the Community Banking (the consumer business) Marketing and Product Management Group. I (we) had lots of ideas about how to charge for checking accounts or how to promote/advertise all the deposit accounts. Terry brought her years of experience in the branches to bear on these ideas which, many times, led to modifications in these "staff" ideas. Once the pricing or marketing decisions were made, however, Terry made sure that her troops were fully backing these changes.
She was also always concerned about the individuals who worked for her. The Queens Branch Division in those years (the mid-to-late 1970s) had a large holiday party for all of the staff in all of the branches. In one of their usual cost cutting modes, one year Chase decided that the bank was not going to pay for any holiday parties. Queens still had their usual big party – and it somehow got paid for.
When Terry told me that she was going to law school when she was well into her 60's, I was at first surprised, but after short consideration I thought that when Terry makes up her mind about something she is going to make it happen, and she did.

From Jim Ross: I remember Terry Molloy with great fondness and admiration. She was indeed a trailblazer for her generation, becoming one of the first female VPs at Chase. I got to know her fairly well when she was manager of Chase's branch at 57th & Third in 1975. In those days, it took years of working smaller assignments to become manager of a branch like that. Terry did her job well and was a wonderful person to work with. I managed a smaller branch on the Upper East Side at the time, and Terry always took my calls whenever I had a question on how to handle a particular transaction. We both reported to Tony Randazzo, so we saw each other at weekly meetings. She was an impressive person and hard worker. Within a short period of time Terry moved on to become Division Exec for all branches in Queens, NY, which may have been the highest position held by a female at Chase at the time.

From Janet Besso Becker: It’s taken me a while to adjust to the fact that she is gone. To borrow an advertising phrase, what does one say about a legend? There was only one Terry Molloy. She was a maverick, a straight shooter and a pragmatic business leader who knew how to motivate her people and always strove to make Chase #1.
Many of you know her story – she started as a computer punch card operator having to work because her husband was sick with a heart condition that prevented him from working. She worked her way up and eventually became one of the first, if not the first, woman to be credit trained at Chase. Many of her superiors admired and listened to her words of wisdom while others simply tolerated her, but either way, she was effective and did a lot for Chase and especially for other women at the bank.
I remember her as always moving, always thinking, always trying to do things just a bit better than anyone else. She was a force to be reckoned with and she caught me up in the vortex of her energy. I remember first meeting her when I worked with Art Humphrey in Community Development. She was running Queens and Long Island for the Consumer Bank and she was a “client” for our services. She saw potential in me and she brought me onto her team when she took over as head of the branches in Manhattan.
I loved working for her. She taught me so many things that were not in the rule book, things that made a difference in the way we did business, and that set us apart as a bank that cared not only for the community but for its people. She taught me how to manage and lead and then let me loose. Some used to say I was “Terry’s pet” which at first bothered me but eventually I got over that and was mighty proud to be seen in any way that was associated with her.
After she retired to go to law school at the age of 65, we stayed in touch. We saw each other from time to time but in the end, just not enough. You all know how that goes, life being what happens when you make other plans? We had been talking over the past few months, trying to schedule a time to get together. Little did I realize…and then it was too late. She will be missed by many people. She touched so any lives. For me I have lost a friend and a mentor, one of the two most amazing people I had the privilege to know at Chase. She has left a big hole that can never be filled.

From Carl Gustavson: If I had to pick the top three individuals I met at my time at Chase. Terry would be in that three. Quite a gal.

From John Benevento: It's hard to decide where to begin when trying to describe the many skills and attributes of Terry Molloy. In my opinion the ones that stand out were her propensity for risk and her ability to see things in people that no one else saw.
When taken together these two things explain the extraordinary team of staff and line managers she put together to run Manhattan in the mid-1980s. I am personally indebted to her for having given me my start in the retail banking business. As I had come from the corporate and international sides of the business with a background in MIS, it was only a maverick with the vision and fortitude that would have hired me as her chief of staff and then, a year later, taken the radical step of giving me eight branches to run. I will never forget this extraordinary woman who changed my life. Rest in peace, Terry, you were the best!