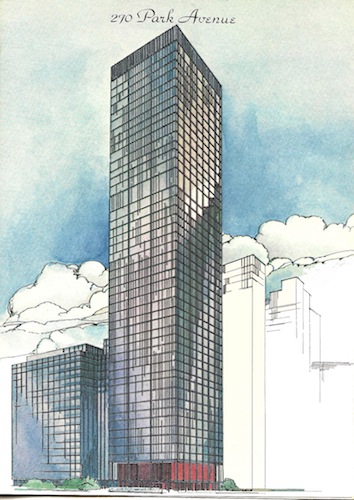 The day finally came. It was the spring of 1983. We had been living in expectation of a move for some time as stories slowly seeped out that the Union Carbide building at 270 Park Avenue would soon be our new home. And then the wait… It is always that way in large corporations; first the cognoscenti of the inner circle ‘hear’, and then word spreads. And then it takes a long time. Finally, boxes arrived and the whole thing was transported over what seemed like a single weekend.

350 Park Avenue had been our HQ since Manufacturers Trust and the Central Hanover Bank amalgamated in September 1961, although it took years for all of the main pieces there to come together. The International Division and the Credit department, for example, made the move uptown from their deep Manufacturers Trust root on Wall Street only in 1968. Indeed, for those few among us who recall the Demand Deposit Account numbering system at MHT, International client accounts always began with 544, whereas domestic account numbering began with 144. Lore had it that the root of this old system was that the international division was located on the fifth floor of 44 Wall Street, whereas domestic accounts belonged to the branch on the main floor. I believe many of these client account numbers survive at JP Morgan to this day, though presumably the practicalities of routing checks internally after receipt from the Clearinghouse has long since faded from memory. (Could employee account numbers beginning 555 have been related to 55 Broad Street?) But I digress…

350 Park Avenue was designed to feel like a proper bank headquarters. The scale was right and it had all managerial functions within easy reach – almost color-coded by floor. The CEO and the National Divisions were on the lower floors. The carpets were beige and the paneling was of light wood, giving it a very open and accessible feel. The International Division on the fifth floor was comprised of four large interconnecting rooms, each occupied by a major geographic region. Its inner sanctum was headed by the indomitable Dwight Allen and his Deputy General Managers. The paneling was dark and the carpet green, and it had the feel of an old London club in contrast to the domestic floors. Indeed, the first lesson I learned in 1978 from Mrs. Fye (then Head of HR) was that gentlemen never leave their desk without first putting on their jackets, a tradition I maintain to this day. The green carpet was technically “Saragossa Sea Green” and, though a carryover from the sumptuous Vice President’s floor at 40 Wall Street, seemed to have gotten brighter on its arrival in midtown.

The floors above the international division held staff functions such as Overseas Credit, the Economics department, the Credit library (where ever-helpful Rose always assisted me), and of course the telex room. During those days, one could send one message per day, which one wrote by hand and which a secretary typed into a long perforated yellow ribbon. The carpets there were red and the furniture functional and grey. A retail branch was down in the lobby and, overall, it did feel like a “proper” bank.

The move to 270 Park, a building three times the size of 350, meant a number of consequential changes naturally ensued. For one, it felt more like a conglomerate corporation than a family bank of yore. Architecture and banking have always been inextricably linked social sciences, and the transplanting of a company into a new building was bound to change relationships. In Victorian times, for example, banking halls were grand and granite so as to inspire confidence and trust among depositors long before the FDIC. In complex modern corporations, where learning and development are key to ‘organizational leveraging’, open space lies at the heart of engineering human interaction. Gone were private offices and the fancy paneling. In came open workspaces and social mixing (before the era in which desks became cluttered with PC terminals, which resulted in a new form of social isolation). The trend to open and modern in fact was pioneered, mid-century, by Manufacturers Trust’s iconic 510 Fifth Avenue branch at 43rd Street, which in architectural terms foreshadowed 270’s construction in 1961 by some six years. 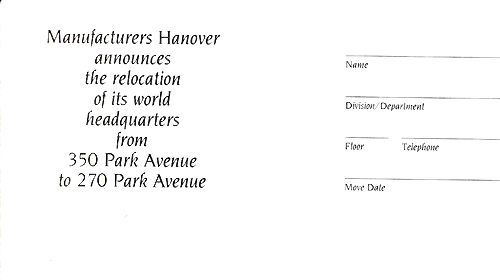 The move to 270 was also an important step forward for the then fourth largest American money center bank, which had as its slogan “Quality, Loyalty & Consistency”. Officers were distributed “Change of Address” cards (pictured) by which they could inform clients of the move – usually with a private note enclosing a newly engraved calling card (in those days all officers had privately engraved stationery). And those clients who came calling were greeted by some recognizable features – key among which were the people, but also the green carpet that carried across the theme from 350 Park (though strangely brighter still in the airiness of the 42nd floor).

And at 270 the technology of banking began to change too. Telex still reigned as the main mode of international communication but something new appeared: a fax machine in a dedicated fax room. Like two hands clapping, it could only communicate with an identical fax at the other end, but at least now there was a quick means to transmit “Operational Problems” to our operational heart at 4 New York Plaza. (When constructed, 4NYP was itself of award-winning architectural design in that the irregularly placed rectangular windows on the façade were meant to echo those of holes in a computer “punch card”, the prevalent technology in data processing at the time.)

Long before the digital wizardry of a modern office, the fax machine was still a vestige of analog technology dressed up in a cream colored box: As you fed the paper in at one end, a little photo/light head scanned back and forth on a sprocket transmitting what it saw as light and dark to be printed on a piece of paper at the other end. There were also big “green screen’ IBM terminals at which you could check a client’s balance intraday (imagine!) to approve payments – back in the day when marketing officers and credit officers were one and the same function. The technology was slow but a harbinger of things to come.

And as in all moves, the main enticement to 270 was a new employee dining facility on the second floor which, in a major egalitarian move, no longer had a separate section with waitress service for AVPs.