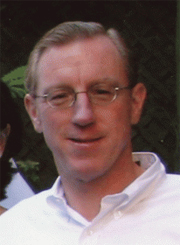 Sullivan was a career high-yield bond salesman whose relationships on Wall Street were deep and varied. He began his career in 1983 at Chase Manhattan Bank in New York, where he met his future partner and long-time friend John Fraser. Sullivan then transferred to London to take on trading responsibilities. In 1989 Sullivan entered high-yield sales at Drexel, Burnham, Lambert. Subsequently, he started and ran First Union Bank’s high-yield bond business in Charlotte, NC. He later became a managing director at Deutsche Bank in high-yield sales.

A graduate of Colgate University in Hamilton, NY, Sullivan was a deeply committed alumnus. He worked tirelessly with the Colgate administration to bring better understanding between the university and the fraternities and sororities on campus. This was driven by his love of and devotion to his fraternity, Beta Theta Pi.

From John Nozell: Tighe and I first met in Credit Training;  although we hadn't known each other in college (we were two years apart), we remained connected through our activities with Colgate long after our careers took us away from Chase. Tighe was an amazing, caring, always positive guy. A memorial is being constructed in Colgate's athletic center.

From James Himoff: Many of us knew Tighe Sullivan as a family man with a bright financial mind and great leadership qualities. He was co-founder of WCAS Fraser Sullivan Investment Management and a very hard worker. I knew Tighe from time we spent together on the Alumni Board of Directors of Colgate University. Tighe was a mover and a shaker. People loved to follow his lead. He was a lover of challenge and the outdoors. Our paths crossed in the Adirondacks where he enjoyed spending time with his loving family. He was a tough worker and a tough athlete. I knew him from his hard strenuous bike rides through some of the toughest biking area in the Adirondacks. He would frequently show up at our place, energized from a difficult ride, spend a few moments catching up and then bike back to Silver Bay. He was a unique and special person and will be missed by everyone he touched.