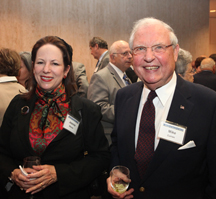 Longtime CAA member Michael (Mike) Curran, 79, died in an automobile crash in the Adirondacks on Tuesday, March 11, 2014, after suffering a heart attack at the wheel.

His wife, fellow CAA member Jeanne Warner, was hurt in the accident, sustaining several broken bones. As of Sunday morning, March 16, she was in fair condition in Fletcher Allen Health Care, a hospital in Burlington, VT.

They were residents of Manhattan, with a second home in Keene, NY, in the Adirondack region of New York near Lake Placid.

Mike began at Chase Manhattan Bank in 1957 and retired as a managing director of JP Morgan Chase in 2002. He had assignments in the United States, France, Germany and the United Kingdom, working in EMEA Finance/Capital Markets, Middle East and Africa Corporate Banking, European Finance Capital/Capital Markets and International Institutional.

Anyone wishing to share a remembrance of Mike should send it to news@chasealum.org.

From Bob Mitchell: During all my years in international banking, Mike was always there, with a smile, a good word and sage business advice. He was one of the good ones; he’ll be missed. What a shame! What a loss!
My deepest condolences to Jeanne, another long-time friend. My heart goes out to her.

From Tony and Sherry Singleton: Mike will always be remembered as a true gentleman and mentor to all who had the good fortune to work with Mike. We will miss him but will never forget him. Our sincere condolences to Jeanne and Mike’s family.

From Tom Kingston: Great sadness today hearing of Mike's accidental death. Mike was the consummate gentleman, friend and representative of Chase. Mike's relationship with me ran the gamut from boss to peer to friend over the years. Mike will be truly missed. More than one glass will be consumed today in his memory.
Condolences to Jeanne and Mike's family.

From Jerry Johnston: Mike and I were members of the famous 12th Special Training Program at Chase (formed not long after the merger of Chase National Bank and the Bank of Manhattan Corporation), working through the summer of 1957 in the un-airconditioned building on Pine before moving into the newly completed 1 Chase Plaza headquarters. John J. McCloy was chairman at the time, but our boss as trainees was the unforgettable Bruno Albat. Mike stayed on with the bank through to retirement, and continued thereafter to organize an annual meeting of the members of the 12th, where we reminisced about the good old days and told tall tales about our various exploits. At Mike's behest, David Rockefeller occasionally joined us for our annual luncheon get together.
He was a good pal of long standing and will be sorely missed. Our thoughts and prayers are with Jeanne.

From Stewart Gager: First, condolences to Jeanne and best wishes for a speedy recovery. I worked closely with Mike off and on during my career at Chase. He was a wonderful, loyal and dedicated guy and will surely be missed. God bless him and his family.

From Don Chaffee: I was deeply saddened to hear this news.  Mike Curran and Jeanne Warner are two of the highest quality individuals I had the pleasure of working with in my entire career. We had the wonderful and challenging experience or rolling out the International Institutional line of business. I know that my old friend Joe Harkins is watching over both of them. Jeanne should be somewhat comforted knowing that  there are people all over the world praying for her and Mike, including me.

From Joe Hosie: Michael, he was my unit head in NY International back in mid '70's with Jack Knippenberg. He was always a most friendly and capable Chase officer who helped me to get assigned to Asian branches. I saw him last at a gathering at 1 CMP about five years ago with David and Jamie presiding that night. I am sorry not to be able to share some memories with him again and may God bless his soul and care for his wife and family.

From Dennis Longwell: What a sad tragedy! Mike was a gracious, upbeat, energetic and professional representative of Chase all over the world. If he ever had a "down" day, I didn't see it in nearly thirty years of knowing him.d One of the good guys indeed.  My condolences and hope for a complete recovery to Jeanne.


From Joe Murphy: Mike's smile!
How many meetings, decisions, discussions - sometimes it seemed International Institutional centered activities around internal meetings. Mike's smile and confidence were always present. He was the most experienced Relationship Manager I know who understood the Customer. And Mike placed the Customer first – a valuable lesson we all learned while witnessing Mike's calm, assertive leadership as the bank rolled out across the world.
Mike's smile was still very much present at 1 CMP 60 last October as in the CAA photo. Jeanne and Mike were in the center of the room and so many of us had an opportunity to talk with them and brag about our families and times shared together.
Dona joins me in our prayers for Jeanne and for their family. We join so many friends across many countries who are remembering so many memories and messages from Mike.

From Bill Padula: Mike Curran always had a ready smile and was an example to many of us. He personified grace and kindness. Very sad to hear of his passing.

From Terrence Wadsworth: Terrible shock. He always had a smile on his face.

From Chris Church: My husband, David Katich, and I both have fond memories of Mike from our days in International Institutional. We both travelled with Mike to our respective territories, Germany and Scandinavia, and remember him as an agreeable and interesting companion as well as an excellent ambassador for the bank. We are so sorry to hear of his passing and send our condolences to Jeanne with best wishes for a full recovery.

From Paul Tongue: Mike and I were graduates of the 12th Special Development Program in 1957. Our paths in the Bank diverged after that, so that I never had the opportunity to work with him, except when we organized the annual reunion luncheon of the Development Program. Throughout his career he was known as a competent banker with an outstanding ability to form and sustain strong relationships with both customers and fellows. It  was no surprise to me when he married Jeanne Warner, a Chase executive with a similar record of accomplishment. Mike was a sweet guy who we shall miss greatly. Our hope and prayers go out to Jeanne on her loss and fervent wishes to her for a speedy recovery.

From David Willmott: I have happy memories of both Jeanne and Mike going back over many years.  There are particular memories after I took on full-time institutional relationship management duties in Northern Europe in the late 1980s, as I knew that I could rely on Mike’s almost encyclopaedic knowledge of the longer term relationships that Chase had with a number of those banks. He was a rich source of information and was always ready with advice and encouragement.
I last saw Mike in October 2013 at the Alumni meeting in New York. Mike had come down from the Adirondacks specifically for this event, and, to me, he had not changed substantially over the years. He will remain in my memory
I should also like to record my sincere condolences to Jeanne, and to wish her a full and speedy recovery.

From Mike Esposito: I was shocked and saddened to hear the news of Mike Curran’s passing. I will always have fond memories of a smiling banker with whom I had occasion to work with on several significant bank transactions over the years, including the acquisition of Chase Bank of Ireland with him and King Lowe.
Mike possessed a very friendly operating style with an overlay of considerable banking business savvy and judgment.
My prayers go out to Jeanne Warner who I had the honor and privilege of directly working with for about 20 years. She was by far the best managerial accountant I had occasion to work with at the Bank. I wish her a speedy recovery.

From Bjorn Sigurdsson: What sad news of Mike Curran passing.  I got to know Mike over 25 years ago as he covered relationship matters in Iceland for Chase Manhattan Bank. He was in every way a true gentleman who was always ready to assist in matters when needed. He was a true friend. Our thoughts and prayers are for Mike and Jeanne at these difficult times and for her full recovery.

From Phillip H. Sorace: Having just learned of Mike’s tragic passing, I am deeply saddened and offer prayers for the speedy recovery of his wife. From the day I joined International Organization Planning Mike was a friendly, collaborative presence. Quick with a broad smile and a soft spoken but assured word of encouragement and advice. He apparently enjoyed the interruptions imposed by recruiting for the SDP on behalf of International, at least he never ducked  or complained to me about interruptions to his schedule. There were many times that I sought out and he freely gave his opinion and advice on a matter of personal or business concern. When I decided to enter the full Credit Training Program as a “staff officer”, something that was rare if not unheard of at the time, Mike was a staunch supporter and private cheerleader. He clearly was one of the good guys and one who earned and deserved the title of true Gentleman.

From Ed Riegelhaupt: What a terrible shame. Mike was the professional institutional banker when I joined Chase to work for Bill Ogden in 1971. Always helpful, always with a word of support when things got complicated. Remember well when the Herrstaat Bank failed and Mike rounded up a bunch of us to work on all kinds of details, day and night and over the weekend...until Chase's position in the situation was clarified. We were all Mike's volunteers in the trenches that week. He will be sorely missed. Our best wishes to Jeanne and hopes for a quick recovery.

From Sierd Tilma: Mike was my introduction to Chase by forwarding my resume in 1977, for which I am forever grateful. He was a wonderful human being and a great example.

From Roger Lieblich: Very sad to learn that we lost another of the really good guys. Mike was a true gentleman, accomplished banker, kind friend and dependable colleague. Many of us know his outstanding attributes, but his thoughtfulness and spontaneous insistence that I, who worked for him at the time, organize a business trip to Italy to join my mother, when he learned my father had a fatal heart attack while on vacation there, will never be forgotten. I join the many who will miss him dearly and hope and pray for a speedy recovery for his wife.