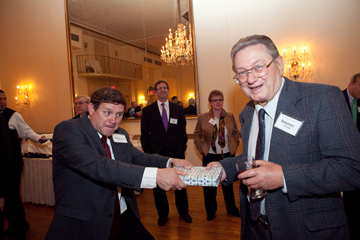 The Board of Directors was elected by acclamation at the spring CAA reception in New York, held at the 3West51 Club on Thursday, May 8, 2014.

CAA President John Ward paid tribute to Jean Marc Bara, who is leaving the board after three three-year terms (plus a year as a volunteer alongside the board).

Click here for more photos (by 85photo productions). Photos are viewable by dues-paying CAA members only.