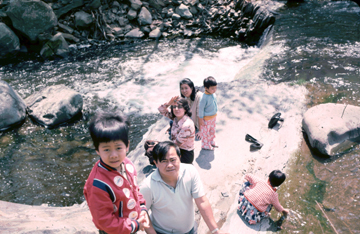 Were you a host family? Send us your recollections

From Theresa Deering: In April 1975 my husband Frank Deering worked for Chase Manhattan Bank as a systems analyst. He came home one night with a request from the bank for volunteers to open their homes to Vietnamese employees from Saigon.

We all knew that the Americans had pulled out of Southeast Asia and now South Vietnam was falling to the North Vietnamese. It would be days and they would be in Saigon itself.

We said yes to the request and were thrilled when we were accepted. A few days later we were told to pick up our family in Manhattan – a husband, wife and three children. We were very fortunate that both the husband and wife spoke English.  Communication was not a problem.

The three children were a daughter age 7, a boy age 5 and the youngest girl, 4. They all had small airline bags... no personal belongings, no extra clothes. We immediately had to take them to get pajamas, underwear, and clothes and shoes.

The mother was the Chase employee and she spoke to me about how her parents and siblings were happy that she had the opportunity to get out.  She knew that people who worked for Americans would not be  safe when the North Vietnamese came.  Stories of murder and torture were told.

I lived in Bloomindale, NJ, and the kids were great.  My neighborhood was loaded with children of all ages and they got along great with my three little Vietnamese children who did not speak a word of English.  They were there only two days when my friend’s son came in and said, "Ahn wants a Coke." I said, "How do you know that when he cannot speak English?” He said, "I just know."  I gave them Cokes and they were happy.

For the short six to eight weeks that they were with me, they were part of my large Italian family, with Sunday dinners with my parents in the Bronx and dinner with my uncle and his family in Westchester. We went to parks for picnics and to the St. Anthony’s feast in Little Italy.

I felt that they were as happy as they could be.  But I never truly understood what they must have felt. They left us to move to an apartment. Later, they moved to their own home in Piscataway, NJ, and I lost contact with them after a period of time.