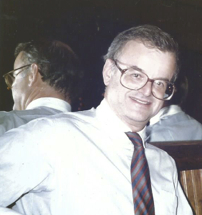 The CAA mourns to passing of its member Nick Robinson, who was Chase Manhattan's senior economist for Europe, the Middle East and Africa (EMEA). At the time of his death, in mid-November 2014, he was chairman of The Hampstead Consultants Group in London.

Nick was a leading expert in financial engineering and risk management, and his career spanned the academic, government and business worlds.

Nick Robinson was a visiting Professor at the University of Surrey and on the faculty of Lombard Risk Consultants training and consulting group. From 1991 to 1993 he was Hang Seng Bank Professor of Finance in the London Guildhall University. Earlier positions included Head of Economics and Business at Sheffield Hallam University, Principal in the UK Government Economic Service and Lecturer in the University of Reading.

He was the author of Techniques of Planning and Forecasting and co-author of Understanding the Economy, Business Behavior and Financial Engineering : A Handbook of Derivative Products. He published widely in academic and business journals and was well known as a conference chairman and lecturer. Nick served on the editorial boards of Treasury Today and Balance Sheet and consulted for KPMG Peat Marwick's London derivatives group.

Anyone with additional information or anyone wishing to share an appreciation/remembrance should send it to news@chasealum.org.

From Pat Wilson: I remember Nick Robinson
When I was in the professional development area as a seconded resource, specifically to produce training videos for corporate bankers, the head of the area who was responsible for the Decision Maker Series wanted to videotape a version of Nick Robinson's seminar/workshop on Advanced Financial Risk Analysis. Today we know this as the fundamental theory for derivatives, that is, forwards, futures, swaps and options and their many, more complex 'derived' instruments. We hired a writer and crew and began to set up the studio for this taping. When Nick realized that we were making his seminar into a "Hollywood" production, he wanted no part of it.  He said he would deliver his multi-part seminar, which consisted of close to eight hours of content, to a camera in a classroom. His props were to be flip charts. I thought, "What are we going to do?" An amateur to speak to the camera for eight hours. Groan. We would be in that classroom for 15 hours.
We hired a crew, rented three cameras (to make life a bit easier in the editing suite) and set up a classroom in the training center at Maiden Lane. Nick arrived. We gave him instructions on how to 'work the cameras.'  For example, when he had a change in thought or content, he would turn to another camera. Though it sounds easy, it is not an easy thing to 'work the cameras.'  Seasoned professionals have difficulty working with three cameras. To say we were astonished at Nick's performance would have been an understatement. Nick walked, talked and drew for close to eight hours straight without a single mathematical or grammatical error or missed cue. If there was a need to do a second take, it was at his request: He hadn't liked what and how he had said something. Nick picked up at the logical spot and continued on. At the end of the taping, everyone on the crew applauded. They had never witnessed such a brilliant performance. Certainly, I hadn't nor have I since.
From that day forward, Nick and I became close friends. When he was in New York, we spent time and dined together.  Similarly, when I was in London, we did the same. I will never forget how wonderful I felt seeing Nick when he flew over the pond to surprise me for a milestone birthday. I was also privileged to be acknowledged in his book on Advanced Financial Risk Analysis. I will miss Nick -- a very, very dear friend.  A footnote to the video: Out of those eight hours of videotaping, we produced a six-part video series (seven hours) on the subject; very little fell to the cutting room floor. This alone is a testament to his genius as a derivative expert and as a teacher.