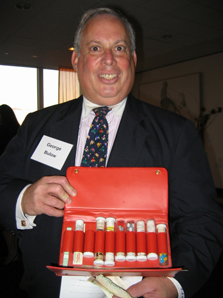 See What the Archivists Deemed the Oldest - or Oddest - Donation

November 2011 Update:  See story on the archives from Fox Business.

More than 30 Chase Alumni donated more than 120 items to the JPMorgan Chase Archives at the October 26, 2006 reception at 1 CMP.

"The Archives would like to extend a great many thanks to each and every one of you who took the time to cull through your drawers, desks and attics to bring in artifacts and testimonials reflective of your rich careers at Chase," wrote Jean Elliott, chief archivist, to the CAA, also on behalf of her colleagues Nancy Palley and Shelley Diamond. "Each of these items will be added to the permanent collection, providing yet another dimension to the records that cover those years.

"It's not always easy to part with something that evokes a high point in your career, but we're grateful that you trust us to care for these items," she continued. "Believe me, your experiences mean as much to us as they do to you!" The archivists bestowed some strictly honorary awards on some of the donations, as follow:

Most Unexpected
Letter of job offer from Chase, from Peter Otto in 1971

Most Touching
Story from Ralph White about being the telex operator in Saigon office right before evacuation in 1975- hoping to get the last telex he sent.

Most valuable additions to our historical memory
1. Photo of David Rockefeller at automated branch [1974] from David Larsen
2. Plexiglass Executive Team Agreement with signatures [1992] and Photograph of “Team 25” from Bob Douglass
3. Materials from formation of International Investment Advisory and Private Banking International from Michael Elzay

Most Number of Items
21 from David Larsen

To learn what other materials the JPMorgan Chase Archives is seeking and how you can donate items, please click here.