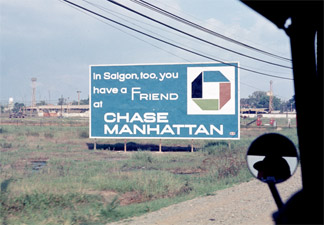 As I read John DeCicco’s account of Chase’s evacuation of its Vietnamese staff, a flood of memories came back.  It was of course a very sad story, but for many of us it was also one of the proudest times in our years with Chase.

My side of the story began with a meeting discussing what to do as the fall of Vietnam became more and more obvious. Chase Manhattan had a particular problem, since many felt that we had mishandled branch closings during the Korean War.

A number of things were decided during that meeting: First, Chase Saigon would remain open until the last possible moment. Next, we would do everything possible to evacuate all of our Vietnamese staff and their families if they wanted to come with us. (There was a specific concern that since the majority of our staff was originally from North Vietnam, which combined with working for an iconic American financial institution would make them particularly vulnerable to retribution.)  Then, Jim Bish asked Ralph White to become acting country manager and provide an in-country American presence at this critical period. Finally, I was asked to travel to Saigon to coordinate New York support of the operation. The only direction I had was to ensure that our people in Saigon were treated as Chase professionals should be.

Saigon fell to the North while I was en route. So, we all came together on Guam – over 120 Chase Vietnamese staff, Asia Regional staff and staff from the MBF (Military Banking Facilities). As John DeCicco described, the Army was in the process of creating what would be called “Tent City.” This refugee camp quickly became overcrowded, dirty and foul smelling. Fortunately, Steve Crytser, country manager of Guam, had in the bank’s possession an empty hotel as a result of a previous poor real estate market. Steve was a friend of the Naval Commandant and was able to convince him to allow us to relocate our staff to that hotel. The army was not pleased and decided that we would be required to go back to the camp the following day. A call to Fraser Seitel, Chase's director of public relations, ended their efforts.

The island was rapidly filling with refugees. It was estimated that getting a flight to the United States would take four to six weeks. We had become such an embarrassment to the Army by bending rules and skirting around orders, however, that our staff was on a flight to Camp Pendelton in California within only a few days. Once there, we dealt with a processing nightmare with the Immigration authorities and were ready to fly our people to New York.

While this was going on what was happening and about to happen in New York was amazing! What do you do with over 120 in various-sized family groupings when they arrive in a strange country, with no place to stay and no family or friends to help them? The answer to this question came when hundreds of Chase staff members volunteered to be host families for our Vietnamese colleagues and their families – not for just a day, but for an undetermined period of time. When the doors of the airplane opened upon our arrival in New York, our carefully vetted Chase families were there to meet their Vietnamese families. That same evening they went home to begin the assimilation process together.

Yet that was only the first step in implementing a multi-faceted plan. All of our Saigon staff were placed in jobs and received additional training as needed. The families all received language instruction, placement assistance, etc. A plan to find permanent housing was put in motion. Chase staff traveled all over the metropolitan area identifying possible apartments at appropriate rental rates, keeping in mind the social and cultural needs of our new families.

All of the apartments found were empty of furniture, cooking utensils, sheets and towels, and everything that helps to make a house a home. A note was sent to our staff about these needs and the response was overwhelming. Bill Menger and a small army of volunteers crisscrossed the metropolitan area nights and weekends in vans and U-hauls, picking up these necessities from Chase donors. Many things appeared to be brand new.

There was some concern that we were wrong to assist in the dramatic cultural and social changes our Vietnamese families had to endure.  Over the years this view has largely dissipated. Many of the Chase families brought together the night of our arrival in New York so long ago are in close contact with each other to this day. The assimilation of our Vietnamese families seems to have been successful. When I retired, some were still working for Chase in New York. Many had moved to other parts of the country, and contacts I’ve had have told me that their children have done unusually well academically and are now productive members of society.

What makes this so unique is that while the entire effort was clearly supported by the Chase Manhattan Bank, it was the staff of the bank who made the difference for our immigrant families at a time when some may remember anything related to Vietnam was unpopular in our country.