How is it affecting your life?
How should we respond?


We're thinking of all our readers who are feeling the impact of the coronavirus crisis. While you may be holed up at home, we hope you will share with us any special stories you have about displacement (i.e., cancelled weddings, postponed divorces or adventures getting home from an overseas trip), odd or funny stories about how you are occupying your time or old banking stories you’ve delayed writing up for us because you were too busy doing other things.
Contribute by writing to news@chasealum.org
Also feel free to comment on the stories below.
Stories now start with the posting date.
4/5/20 For our U.S. readers: here's a pretty definitive list of largely wholesale grocery delivery services available in the tri-state area (primarily New York, but some for New Jersey and some ship nationally).

3/29/20 from Brenda Scotland: My sister is on the front line. And although things are hectic and require long hours, the team of doctors and nurses are 24/7 to keep patients well. As are all of our medical practicioners. She works at Our Lady of Lourdes Medical Center in Camden NJ, and has been on staff at hospital many hours. She goes home to change and catch a nap and returns to the hospital 45 minutes away.

Just wanted to share not only about my sister but also all of the medical professionals who are going above and beyond - working amazing hours to keep us all safe.
To the left is a picture she sent to me (she's second from left) - when I reached out to touch base on how she was doing. Her time is totally focused on patients.
Keep them all in your thoughts.

3/22/2020 from Sergei Boboshko: Read his marvelous account of the reception and concert to commemorate the opening of Chase Manhattan Bank International in Moscow, in 1994–including the Russian National Orchestra performing John Philip Sousa in Moscow!

3/18/20 from Victor Ho: Here's a photo of us lining up to buy face masks in Taipei. We are fine in Taipei! People here are very alert, as we have lots of anti-SARS experience from 2002. Most of the time we stay at home! We wear face masks when we are out.Hopefully all will be gone soon. God bless NYC! 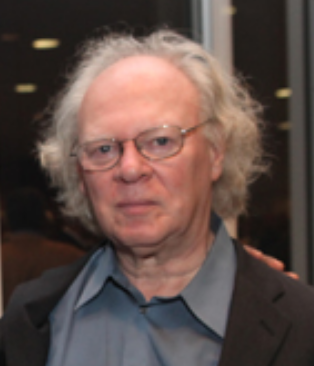 3/15/20 from Joseph Lyons: I don’t have a story about displacement, but a suggestion about coming together and looking toward the future. Over the weekend, I sent my children my views and analysis of the challenges the US will face between now and June 30 in the event of a huge ramp up of serious infections, including the potential for shortages of ventilators, ICUs and medical personnel that could lead to rationing treatment and higher mortality. The best forecasts of the numbers are sobering. Today my daughter, who has a graduate degree in engineering from CMU and has led engineering teams at Google, had a few creative ideas for rapidly producing a variety of ventilators with various levels of complexity.  However, such ideas require collaboration across teams of professionals and influential people to motivate a sense of urgency and connect individuals who can collectively create and produce new processes and products to address the coming crisis.  Within a few hours, our nuclear family identified a number of groups and individuals with the right expertise to address the engineering issues and began contacting them.
We were amazed at all the work that is well underway at this moment, of which very little is brought to you by mass media. Perhaps my family will have little to add, but I would urge everyone to look realistically about the detailed requirements of what is required to combat this virus.  Do the analysis, collaborate with others and do wherever you can play a part in mitigating the effects.
At Chase, I worked in the Management Science Department. In the 1970s and 1980s, my colleagues nationwide in the community of people trained in Management Science and Operations Research easily crossed boundaries across industries and disciplines to apply their skills to problems of all kinds, including health pandemics. If you go back to World War II, Operations Researchers created applications that played a substantial role in the war effort and consequent peacetime commercial applications.

3/16/20 from your webmaster, Andrea Axelrod: Just before all hell broke loose, I got to sing at a concert celebrating Stephen Sondheim's 90th birthday, at our mutual alma mater, Williams College. Here I am -- singing a song about survival. Let us all still be here when this crisis subsides! 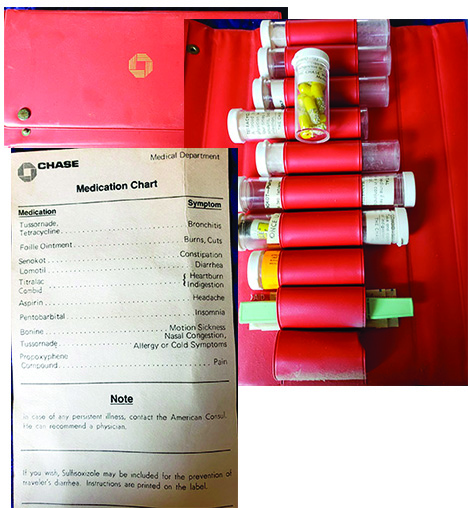 In the 1970s, Chase would send you off on overseas assignments armed with a medical kit with antibiotics, creams and band-aids. The purpose was not to have to rely on overseas pharmacies or to provide relief as you attempted to get back home for treatment. You would be  given a letter from Dr. Granville Walker, VP & Chase Medical Director to make it legal.
I came across this Chase artifact while searching an old trunk. Don't worry–I'm not going to use these 40+ year old pharmaceuticals!

We'll probably find ourselves with more time to read as we stay indoors. Send us your book suggestion with a short explanation of why you recommend it.

It's a great time to catch up on books written by Chase Alumni:

► Frank Reider, Can't Get No Satisfaction

3/22/20 Andrea Axelrod recommends Daniel Defoe's A Journal of the Plague Year, because everything old is new again. (It's available as a free pdf online.)
"Here we may observe and I hope it will not be amiss to take notice of it that a near view of death would soon reconcile men of good principles one to another, and that it is chiefly owing to our easy situation in life and our putting these things far from us that our breaches are fomented, ill blood continued, prejudices, breach of charity and of Christian union, so much kept and so far carried on among us as it is. Another plague year would reconcile all these differences; a close conversing with death, or with diseases that threaten death, would scum off the gall from our tempers, remove the animosities among us, and bring us to see with differing eyes than those which we looked on things with before."

3/22/2020 from Laura Effel: So many books! So little time!  You cannot go wrong with these.
If you like reading about history, here are some of my favorites.
Destiny Disrupted: A History of the World Through Islamic Eyes by Tamim Ansary. You won't find this point of view written many other places. Ansary was born in Afghanistan of an Afghan father and American mother. He moved to the US at about 10, went to college here, and teaches writing in San Francisco.
The Black Count: Glory, Revolution, Betrayal, and the Real Count of Monte Cristo by Tom Reiss.  Fascinating and real.
Killers of the Flower Moon: The Osage Murders and the Birth of the FBI by David Grann. A shameful part of our national history that ought to be better known.
Elephant Company: The Inspiring Story of an Unlikely Hero and the Animals Who Helped Him Saves Lives in World War II by Vicki Croke. The title says it all.
Reading Lolita in Tehran: A Memoir in Books by Azar Nafisi. You will never read Lolita the same way again.
Permanent Record by Edward Snowden. Find out what really happened and how he ended up in Moscow.
If you like police procedurals and mysteries, try these. Devil in a Blue Dress by Walter Mosley. Don't forget to find the song of the same name on YouTube. Fun.
True Confessions by John Gregory Dunne. It's the perfect procedural.
Anything by Michael Connelly or Henning Mankell. I like these two authors in part because their heroes are not sociopaths.
Novels: The Remains of the Day by Kazuo Ishiguro.  My all-time favorite novel.  The main character is a butler reminiscing about the wartime years.
A Short History of Tractors in Ukrainian by Marina Lewycka.  Funny.
If you crave short stories, try these. A Good Scent from a Strange Mountain by Robert Olem Butler.
For something to read to young grandchildren, Cloudy With a Chance of Meatballs by Judi Barrett.Kids seem to agree that the book is better than the movie.
3/22/2020 from Clare Johannessen: A very short book (more of a short story) by EB White  called Here Is New York.  EB is the author of Charlotte’s Web and Stuart Little. The book is truly entertaining for any New Yorker and somewhat predictive of NYC‘s most recent disasters, including the coronavirus. Let me know what you think!
3/23/2020 from Rudi Bogni:
Belonging: The Story of the Jews 1492-1900
by Simon Schama

Civilisation: The Rest and the West
by Niall Ferguson

3/23/2020 from Dave Kuhn: For both history buffs and others, I recommend Destiny of the Republic by Candice Millard. Rising from poverty, James Garfield reluctantly became the 20th U.S. President in 1881 before being assassinated by a delusional office seeker just months into office. British surgeon Joseph Lister’s recent development of antisepsis medicine had yet to be accepted by a skeptical American medical establishment. Garfield lingered for two months while his medical team searched for the bullet, and it is now generally accepted that his death resulted not from the gunshot but from the resulting infection unwittingly created by his medical team.

The author somehow turns otherwise dry presidential history into a fascinating glimpse into late 19th century life in America: politics, medicine, criminal defense and technology. Example: young Alexander Graham Bell, recent inventor of the telephone, worked feverishly to develop  a metal-detecting device in an effort to find the bullet and save Garfield’s life. Garfield comes across as a remarkable man who conceivably would have made a real mark on the presidency. Millard brings him and his era to life.

3/27/20 from Jürgen Wittayer, Chase Frankfurt, 1975-1979, Chase NY Foreign Exchange Advisory: As a fan of American Literature, I'd like to recommend an author whom I once met in person, when he was a very young man: Peter Cameron, born in New Jersey in 1959. Does the name ring a bell to some of you? Yes, he is the son of Donald Cameron, Senior Vice President Treasury, who died in 2007. Some of his books have been translated in German. I can recommend Someday This Pain Will Be Useful to You.
3/29/20 from Phillip Johnson: Last year I acquired a book on Russian history, having been interested in what its history is but not certain what would be a good book.I finally purchased A History of Russia, 9th Edition, by Nicholas V. Riasanovsky and Mark Steinberg, which was on Amazon.  Some 650 pages and just now on 580-the rest it is about Yeltsin and Putin. I can’t say any of it is uninteresting or boring. A lot of it is about its internal history, but also Sweden, Finland, Poland, France, Germany, Austria, UK, Japan, the Caucasus, Turkey, etc.  Sorry I had missed so much of European/Asian history in my life (I am 80 now) and knew so little about Khruschev, Brezhnev, Stalin, Gorbachev, Yeltsin and, of course, the prior emperors. There were a lot of thinkers there, artists, etc.  I traveled to Russia a couple of times meeting Russians and had been impressed by how well educated some of them were. I have seen some of the limitations of its abilities. This agrarian country became a real industrial country though never completely left its agricultural background. Very important in the world and a very informative book to help you learn more about it.  I can actually read it before going to bed and don’t fall asleep while reading. Ukraine was an important part of its early history and development.